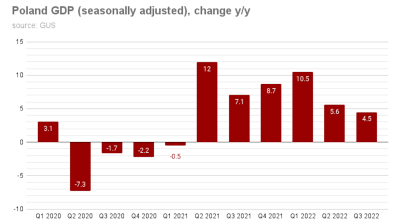 Polish GDP expanded a seasonally adjusted 4.5% y/y in the second quarter (chart), easing from an expansion of 5.6% y/y in the preceding three months, the statistical office GUS said in a preliminary reading on November 30.

GUS revised its flash reading from mid-November upwards by 0.1pp but the fundamentals of growth are clearly weakening, analysts say, pointing to sharp slowdowns in the expansion of private consumption and investment.

That is setting up a further decline in economic activity in the fourth quarter and Q1 2023.

“While a gradual economic recovery should arrive in the second half of 2023, next year’s GDP growth may be close to zero,” Marcin Luzinski and Grzegorz Ogonek, analysts with Santander Bank Polska, said in a comment.

“Surprise weakness of private consumption will strengthen the National Bank of Poland’s resolve to keep interest rates stable and further shift the focus of monetary policy from CPI to the economic slowdown,” the analysts also said.

The Q3 slowdown was a result of precipitous falls in growth rates in household consumption and investment segments, the breakdown of the data showed.

Household consumption growth eased 5.5pp to just 0.9% y/y in Q3 while investment managed an expansion of just 2% y/y, down from a gain of 6.6% y/y in the second quarter.

Inventories’ positive contribution to growth was a surprise but likely only a one-off, as companies will return to depleting their stock while reducing output. That will drive a further decline in the GDP growth rate, analysts say.

On a brighter note, net exports contributed positively to GDP in the third quarter. “Increased inflow of foreign direct investments to Poland, a revival of activity in the automotive industry, as well as taking over parts of supply chains from Ukraine,” supported Polish exports in Q3, Santander Bank Polska noted.

Quarter-on-quarter, the economy expanded an adjusted 1% after a fall of 2.3% q/q in Q1. That is an upward revision of 0.1pp versus the flash estimate.

Given a strong first half of the year, the upcoming slowdown is still expected to land Polish GDP expansion at around 4% this year. The economy is currently forecast to grow 1% at best in 2023.

Poland basks in the glory of being Europe’s chief ally of Kyiv
VISEGRAD BLOG: When Eastern European states speak out they are now listened to
bneGREEN: Renewable energy was a hot topic in Davos but for Europe, much work remains