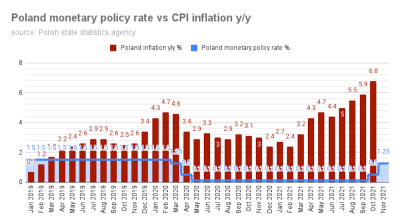 A 21-year high reading confirms the flash estimate, which GUS published early this month. The ongoing surge in consumer prices – which is yet to peak, analysts say – has spurred the National Bank of Poland (NBP) into action twice already, raising interest rates from their all-time low of 0.1% to 1.25% in October and November.

The accelerating price growth will likely enforce a longer tightening cycle. Analysts currently expect interest rates to climb to 1.5-2% during 2022.

“The supply shock is spreading all over the economy,” Poland’s state-controlled bank PKO BP said in a comment.

“Inflationary pressure is wide and the CPI is boosted by all of its main components: energy, fuel and food prices, as well as core inflation,” PKO BP said. Core inflation came in at an estimated 4.5% y/y in November from 4.2% y/y the preceding month.

The price of fuel jumped 33.9% y/y in October, adding 5.3pp versus September, the breakdown of the data showed. Transport prices – of which fuels are a part – grew 22.1% y/y overall, picking up 3.6pp versus September.

Food prices increased 5% y/y in the tenth month, compared to a growth of 4.4% y/y in September. Housing and energy prices added 9% y/y in October versus 7.2% y/y the preceding month.

The outlook for inflation until the first quarter next year is that of growth. With that, there will come more monetary tightening, analysts say.

“The 7% y/y threshold is likely to break in November already and price growth will peak at 8.2% y/y in February, in our opinion. That will increase pressure on the [central bank] to raise interest rates further. We are going to see a hike of 50bp in December already,” Santander Bank Polska said.

In monthly terms, CPI expanded 0.7% in October, with the growth rate picking up 0.4pp versus September, GUS also said.

Poland’s unemployment rate falls to lowest point since 1990
15 hours ago
Hungary’s jobless rate inches down to 3.5% in May
3 days ago
Polish retail sales growth eases to 8.2% y/y in May
4 days ago
Ruble rises to seven-year high, best performing currency in the world
5 days ago
Polish PPI inflation accelerates to 24.7% y/y in May
5 days ago