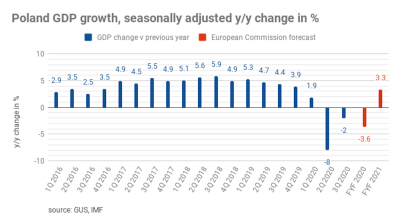 Polish GDP fell a seasonally adjusted 2% y/y in the third quarter after retreating 7.9% y/y in April-June, a flash estimate released by the Central Statistical Office (GUS) on November 13 showed.

The reading shows Poland’s economy recovering after the shock of the lockdown, in place throughout a considerable part of the second quarter to contain the coronavirus (COVID-19) pandemic.

In unadjusted terms, Poland’s GDP contracted 1.6% y/y in Q3 versus a fall of 8.4% y/y the preceding quarter, GUS data also showed. In quarterly terms, economic growth jumped an unadjusted 7.7% in July-August after -9% q/q in the second quarter.

The recovery is there but it will likely not last in the fourth quarter, Santander Bank Polska warns. “The trend will not continue in Q4, as the new wave of the pandemic and related restrictions will probably cause a further decline in economic activity,” the bank said in a comment on GUS figures.

Still, the contraction is expected to be mild at some -3% in 2020 overall and Poland’s recession will likely turn out one of the least severe in Europe.

GUS did not provide the GDP structure in its flash estimate. “On the basis of the available high-frequency data, it can be concluded that the main driving forces of the economy were private consumption and exports, which was supported by the implementation of the pent-up demand,” Bank Millennium wrote.

“Corporate investments are relatively weaker due to the high uncertainty in the economy, driven by the difficulty in estimating the impact of the pandemic,” Millennium Bank also said. Another obstacle to growth is the slowdown in infrastructure investments, as the current EU budget is coming to an end.

A detailed breakdown of the flash reading – together with a possible revision of the data – is scheduled for publication on November 30.

Higher borrowing by the governments of Bosnia’s two entities pushed up turnover — mainly trading in government bonds and T-bills — on the Sarajevo and Banja Luka exchanges, but the main indexes dropped.

Romania's construction work index increased by 7.8% y/y in November, a robust growth yet slower than in previous months of the year.

Support for EU accession has increase significantly compared to 2019 when about 66% of citizens were in favour shows survey commissioned by EU delegation to Montenegro.