Polish inflation 'out of control' as jump to 12.3% y/y in April sets stage for radical interest hike 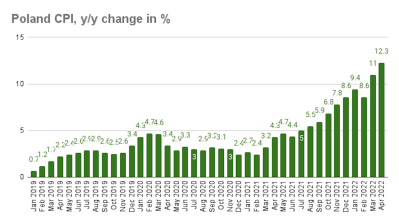 Polish CPI accelerated 1.3pp to 12.3% y/y in April, the highest rate in 24 years, the statistical office GUS said in a flash estimate on April 29.

The sharp increase in the inflation rate came on the back of food prices growing 12.7% y/y, a major pick up against a gain of 9.2% y/y in March.

The reading’s going well past market expectations for a growth of 11.5% y/y is likely going to keep the National Bank of Poland in turbo-hawkish mode, analysts say.

After a surprise hike of the central bank’s reference rate by 100bp to 4.5%, another increase of the same scale appears a basic scenario now.

“Inflation is out of control and containing it will require aggressive hiking of interest rates,” Bank Millennium said.

“We expect that in May the NBP will raise rates by 100bp and this year can see the NBP rate at 7.5%. The target rate level is shifted to 7.5-10%. Double-digit interest rates in Poland are no longer a theoretical topic,” ING said.

Core inflation picked up to around 7.5% y/y in April from 6.9% y/y in March, analysts estimate.