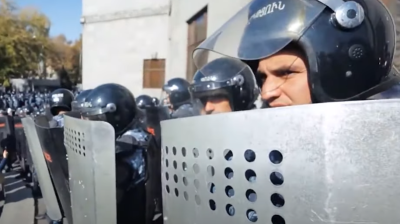 Police guard the parliament building as angry crowds gather around its perimeter.
By bne IntelIiNews November 12, 2020

Several thousand protesters defied martial law on November 12 to gather in central Yerevan and demand the resignation of Armenian Prime Minister Nikol Pashinian for “traitorous actions” in signing a Russian-brokered ceasefire bringing an end to the six-week Nagorno-Karabakh war that has ceded territory to Azerbaijan.

It was the second day of impassioned protests, with crowds angry that the territory signed away in the peace deal was land won in the bloody war in the early 1990s. “Nikol is a traitor,” some protesters chanted. Others shouted “Nikol leave!”

Seventeen opposition parties issued an ultimatum for Pashinian to step down by midnight as several hundred demonstrators marched on parliament. Pashinian’s chief of staff responded to the ultimatum with a statement reading: “We won’t allow criminal elements to take power and will apply all the measures provided for by law to do this. Have no doubt.”

Parliament announced that a special session to discuss the calls for the resignation of Pashinian would take place on the evening of November 11, but it did not take place as a quorum for the session in the legislature was not achieved. The chamber is dominated by Pashinian’s supporters. Opposition leaders called on the protesters outside the parliament to leave and promised to share their future plans on November 12.

A number of protesters were arrested. They included Gagik Tsarukyan, leader of the opposition Prosperous Armenia party, according to a Facebook communication from Hripsime Arakelian, a member of his party. Prosperous Armenia is the second biggest faction in parliament.

Earlier, Pashinian had refused to resign, saying he had no choice but to take the “incredibly painful” decision to sign the ceasefire because the armed forces advised him that the military situation had become hopeless and Azerbaijan was poised to retake all of Nagorno-Karabakh.

Moscow said early on November 12 that more than 400 of a planned near-2,000-strong contingent of Russian peacekeepers have already arrived in Nagorno-Karabakh. The deal means they are expected to remain in the region for at least the next five years. Maps of the deployment showed that Russia will maintain 16 observation posts, including many along the Lachin corridor, a key supply and transport lifeline between Armenia and the main Nagorno-Karabakh city of Stepanakert.

Dmitri Peskov, the Kremlin spokesman, moved to quash speculation that Azerbaijan’s close ally Turkey will have peacekeepers on the ground in the disputed enclave. “No, there was no talk about joint peacekeeping forces. This subject has never been discussed. The joint interaction area will be in Azerbaijan’s territory, this won’t be Karabakh, and we’re talking about a monitoring centre,” he said.

Not party to ceasefire

Turkey is not a party to the ceasefire, nor is it mentioned in the agreement that provides a mandate for the Russian peacekeeping mission. However Turkish President Recep Tayyip Erdogan said on November 11 that he expected Turkish troops to monitor the ceasefire in Nagorno-Karabakh, citing a memorandum of understanding that he signed with Russia. That document has not been made public by the Kremlin.

“Turkey will join the peacekeeping forces in the [Karabakh] region to monitor the implementation of the deal with Russia,” Erdogan said in remarks to his AKP party in Ankara.

On the evening of November 11, the head of the Nagorno-Karabakh administration, which refers to the enclave as Artsakh, urged local Armenians not to flee the region as Azerbaijan consolidated control over the surrounding region.

“We don’t have a final decision about what to do,” he said, as reported by Reuters, adding: “But I want to tell you that the roads will be safe. Do not move your property from Artsakh to Armenia. You will see that we will live in Artsakh.”