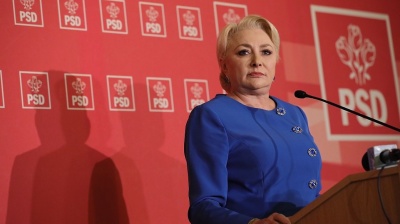 Romania’s parliament passed a no-confidence motion against the government headed by Prime Minister Viorica Dancila and backed by the Social Democratic Party (PSD) on October 10 with 238 votes — five more than needed.

Dancila was the third prime minister appointed by former PSD leader Liviu Dragnea, who is now serving a prison sentence for corruption, since early 2017 when the Socialists supported by the Alliance of Liberals and Democrats (Alde) formed a robust ruling coalition after the December 2016 general election.

The political turmoil started when Alde pulled out of the ruling coalition in August, partly because Dancila insisted for running for the presidency, instead of backing Alde president Calin Popescu-Tariceanu.

The leader of the largest opposition party, the National Liberal Party (PNL), Ludovic Orban, confirmed he is willing to form a cabinet supported by a new majority in parliament.

Orban can count on the support of President Klaus Iohannis in his attempt to form a new cabinet, but majority support is not yet guaranteed among lawmakers.

The weak points in the formation of a new majority are the rivalry between the major opposition political blocks USR-PLUS and the PNL on the one hand, and the support from two of the smaller opposition parties represented in the parliament: Alde and former prime minister Victor Ponta’s Pro Romania.

A few days before the no-confidence vote Ponta, a former PSD leader, announced plans to form a new centre-left coalition supported by the PSD MPs willing to follow him rather than Dancila. However, negotiations on such a political construction have not started yet.

The Democratic Alliance of Hungarians in Romania (UDMR) said it is not willing to join a new majority but as it demonstrated in the past it might provide limited support to secure political stability.

The PNL has summoned a meeting for the morning of October 11, ahead of going to Iohannis for consultations. Negotiations have already started on the composition of the cabinet at the same time as — and in strong connection with — the confirmation of the new majority.

Separately, Orban said that he is sure that the new government will submit a valid nomination for Romania’s seat in the new European Commission. Two nominations put forward by Dancila have already been rejected.

Speaking immediately after the vote Dancila, who held the prime minister post since January 2018, indicated she does not consider her political career to be over.

“I have the feeling that I did my job,” Dancila stated after the vote.

She added that she will launch her electoral campaign for the presidential campaign on October 12. The vote, in which Iohannis is widely expected to be re-elected for a second term, is scheduled for November 10.

Romania government to pursue “ambitious” timetable for justice reforms
M&A in Central and Eastern Europe fell 16% in value in 2020, says CMS report
Private finance mobilised by development banks up 9% to $175bn in 2019

The freshly minted US President Joe Biden intends to ask Russia for a five-year extension to the crucial START II missile treaty, one of the pillars of the Cold War international security infrastructure that is due to expire in February.