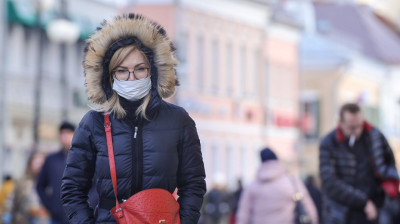 Russia suffered its first coronavirus death on March 19 when a 79-year-old woman passed away. Officially there are only 199 cases in Russia.
By bne IntelliNews March 19, 2020

Russia suffered its first coronavirus death on March 19 when a 79-year-old woman passed away.

The women reportedly had secondary conditions including type 2 diabetes, artery disease, and hypertension.

The number of official cases in Russia is still low compared to other countries in the region, but now climbing. The number of confirmed cases increased from 147 to 199 on March 18, reports BMB. On March 20 the Russian newspaper Vedomosti changed its masthead to read "VseDomoi", which translates to "Everyone at home" as concerns over the virus escalate. 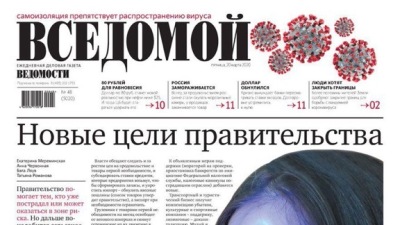 However, there are disturbing reports from local press and social media that hospitals in the capital have seen a surge of respiratory illnesses and pneumonia cases. Other reports say that hospitals are already struggling to cope with the number of patients.

It is widely assumed by observers that the government is suppressing the numbers as it remains focused on holding a referendum to pass the recent changes to the Russian constitution that will re-set the clock on the term counter for Russian President Vladimir Putin and clear the way for him to serve an additional two terms in office until 2036. The Kremlin has refused to cancel the event despite ramping up its response to hinder the spread of the infection.

Moskovsky Komsomolets reports that the dead woman worked at the Gubkin Oil and Gas University and had been giving lectures up until she was hospitalised, although the university denies the reports.

Officials have downplayed the role coronavirus played in her death: she “died from a whole slew of illnesses, and coronavirus was not the reason for death,” Moskovsky Komsomolets writes.

Although the woman was hospitalised with viral pneumonia, Moscow’s coronavirus headquarters stated that she officially died of a “blood clot” and so the official death toll in Russia remains zero.

Rospotrebnadzor, the body overseeing the coronavirus  outbreak, has compiled a list of 120 students and 20 lecturers with whom the woman had been in close contact. 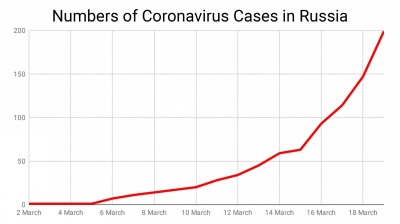 All 85 of Russia’s regions declared high-alert status on March 19 in response to the outbreak. Large gatherings have been be banned, schools and universities will move to remote learning, and individuals will be encouraged to work from home nationwide.

The definition of a “large gathering” varies by region from 50-1,000 individuals. Moscow and St. Petersburg have both banned gatherings of more than 50 people.

The Duma passed a law allowing the government to freeze drug prices during an emergency. In the case of either an epidemic or a 30% increase in drug prices within the span of a month, the government can set a 90-day price ceiling.

The April 22 date will be removed from all billboards and informational bulletins about the nationwide vote on constitutional reform, although Putin signed a decree this week officially scheduling the plebiscite for that date.

Rumours continue to swirl that the Moscow City government will lock the capital down any day, but the authorities continue to deny it.

So far Russia seems to have escaped relatively lightly from the pandemic. Our World In Data released a chart that plots the number of tests per million people against the number of reported cases. The chart is on a logarithmic scale which flattens the exponential growth of the virus, but it shows that there is a direct proportional relationship between the number of test and the number of cases.  According to this chart Russia remains an outlier with far fewer cases than it should have given the number of tests. However, the Moscow Times reported last week that the domestically produced tests Russia has been using are not very sensitive and fail to spot infections in people who are already infected. 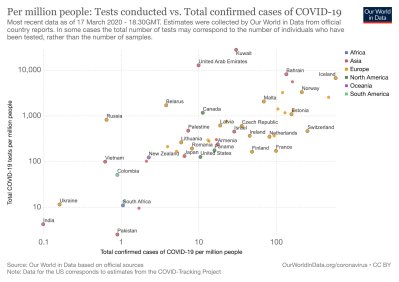 At the same time, while the number of coronavirus case appear to be under reported there has been a sharp and measurable increase in the number of pneumonia cases in the Russian capital, which is one of the main consequences of suffering from COVID-19.

Russia, which has a population of 144mn, has reported just 199 coronavirus cases as of March 20.

“I have a feeling they (the authorities) are lying to us,” said Anastasia Vasilyeva, head of Russia’s Doctor’s Alliance trade union, as cited by Reuters.

The number of cases of pneumonia increased by 37% in Moscow year-on-year in January, according to Rosstat.

The data showed that the Russian capital, which has 98 confirmed cases of coronavirus, recorded 6,921 pneumonia cases in January, up from 5,058 the previous year. Nationwide pneumonia cases also spiked by over 3% year-on-year.

Yet Moscow’s own health department issued a statement on March 13 saying pneumonia cases in January and February were actually 8% and 7% lower than last year.

Moscow said it was at a loss to explain the difference between its own numbers and those of Rosstat.