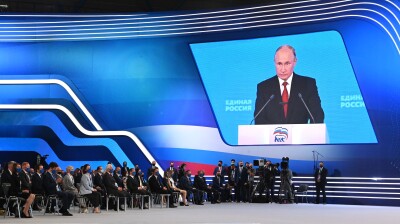 Russian president has turned on the social spending spigot ahead of Duma elections in September, but the spending is also designed to bolster economic growth but could drive inflation up.
By Artem Zaigrin Sova Capital chief economist in Moscow August 25, 2021

President Vladimir Putin spoke at the party congress for the ruling United Russia Party on 24 August. In addition to meeting with party officials over the weekend in the lead-up to next month’s parliamentary elections, Putin announced that there would be additional social outlays and spending starting from September instead of after the State Duma convenes for the first time following the elections. Putin also discussed Russia’s economic agenda, pushing the government to sustain the growth momentum.

The government should prioritise sustainable growth via an infrastructure stimulus. According to Putin:

The social agenda appeared to be even more generous than the one discussed over the weekend. The initiatives include:

Putin reiterated that banks must return the social payments withdrawn from their customers’ accounts for loan payments, as well as insisted on securing such payments from withdrawals.

Finally, Putin praised United Russia’s efforts and encouraged the party to continue working towards its targets.

On a separate note, former prime minister and current United Russia Party leader Dmitry Medvedev expects the party to win a majority in next month’s elections. He also floated the idea of an annual raise in the minimum wage.

According to Minister of Finance Anton Siluanov, the one-off payments to pensioners and members of the military and law-enforcement agencies will amount to nearly RUB500bn, which should come from additional non-oil revenue (RUB1.6-1.7 trillion).

Overall, the government continues to shift its policy towards more redistribution, along with additional support for the most vulnerable social categories (e.g. pensioners and low-income families) to reduce inequality. Increasing Russia’s economic potential via an infrastructure stimulus remains key. While we note that payments to pensioners and members of the military and law-enforcement agencies are likely to occur, the proposed indexation should be seen as a pre-electoral promise, although it should happen in the lead-up to the presidential election in 2024.

Yesterday’s proposals would increase social spending vs. Putin’s speech over the weekend and could result in higher inflationary pressures in the mid-term. On our estimates, the one-off measures could add 0.25ppts to headline inflation in 3Q21, resembling the impact of the RUB5,000 payments to pensioners in 2017.

Importantly, while the non-oil fiscal balance held back Russia’s economic recovery and extracted additional revenue from the economy, the demand-supply imbalances on different markets could mitigate any effect from the fiscal policy.

In the mid-term, higher social spending and a more solid infrastructure stimulus could change the CBR’s fiscal stance to more inflationary and make it keep the monetary policy tighter within the longer-term neutral range (average key rate of 5-6% from 2023). We also see more reasons for the CBR to fine-tune its policy stance in September via an additional rate hike of 25bps, as well as to keep the rate on hold for longer (e.g. until 2H22).