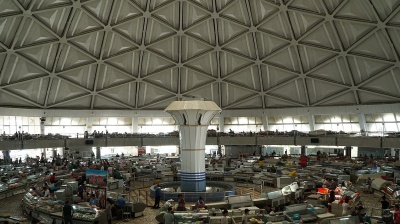 More than 10 tonnes of sugar are sold at Tashkent's Chorsu bazaar per weekday, and twice that on weekend days. / Adam Harangozó, cc-by-sa 4.0
By Muzaffar Ismailov in Tashkent June 13, 2022

Endless queues for sugar are causing anger and frustration in the bazaars and supermarkets of Uzbekistan. Eyewitnesses talk of some of those in line even threatening violence to get their way.

Sugar in the Central Asian country has soared in price with logistics difficulties hindering the transit and delivery of sugar cane from Brazil to Uzbek sugar refineries. Some unscrupulous buyers are attempting to exploit the situation by buying sugar in huge quantities for resale.

Traditionally, at the beginning of June, people in Uzbekistan buy substantial amounts of sugar for use in the preparation of compote for winter or to make jam. It is during the early summer season that the fruits required for jam are ripest.

Responding to the tense situation with queues, authorities said that available sugar reserves were enough to cover the demand and that only certain people in the queues were causing a fuss.

Daryo news agency published a report about one man who allegedly bought 158 kilograms of sugar at Chorsu bazaar in Tashkent. He also reportedly encouraged his relatives and friends to come along to boost the amount of sugar that could be purchased and taken away.

On average, more than 10 tonnes of sugar are sold at Chorsu bazaar per weekday, and twice that on weekend days, according to the bazaar management.

Daryo, meanwhile, quoted the Antimonopoly Committee as saying: "Every day, 2,000 tonnes of sugar are put on the stock exchange. During June 1-9, 14,000 tonnes were put under the hammer, everything was sold. The initial price was UZS 8,900 ($0.81), then the price rose to UZS 13,000($1.18) . We have two factories in the republic that produce sugar. They are included in the state register of natural monopolies.”

"Due to the geopolitical situation in the world, there are problems with logistics. Prices have risen sharply in this service sector. We bring raw materials from Brazil [the world's largest producer of sugar cane]. Prices for transportation by ship and rail have increased. On average, prices have risen by 8-10%. In summer, the demand for sugar increases. That's why prices are rising," the committee said.

Domestically, sugar is produced at the Angren and Khorezm sugar refineries. The average sugar price at the bazaars stands at around $1.09 per kg. Those who do not have the time or patience to get through a long queue have the option of buying sugar for $1.90 per kg.

In the supermarkets, the sugar runs out by the middle of the day. Sellers of some small retail outlets said that deliveries of new sugar consignments were carried out during night hours and many consumers were aware of this.