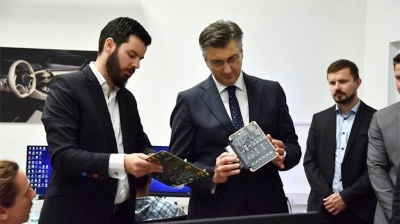 Croatia could become the next car-making hub in Central and Eastern Europe (CEE) region, Mate Rimac, founder and CEO of supercar producer Rimac Automobili, said at a meeting with Prime Minister Andrej Plenkovic and other top government officials.

Rimac was presenting an in-depth study of the car industry’s future development. He emphasis how Croatia is potentially more attractive to international auto manufacturers than the other countries from the CEE region.

The study outlines the two major waves of investment into automotive production in the region in the last 20 years, and poses the question: could Croatia be next?

“Two waves of auto industry expansion in Central and Eastern Europe have proven to be extremely valuable for the economies of these countries. A new wave of investments is under way and due to new circumstances, Croatia has the opportunity to become the next destination of the new car industry,” Rimac said according to a statement from his company.

However, he added, “To be attractive to the manufacturers and suppliers, we need to develop comparative advantages over other countries. We want to contribute to attracting investors to Croatia, and our role is to point to the needs and expectations of the auto industry, while the government’s role is to decide whether new auto industry is the right direction for Croatia's strategic development and if so, form policies in the direction of attracting investment.”

Rimac Automobili develops and produces electric vehicle components and manufactures electric super sports cars. The company has come a long way since it grew out of its founder's hobby of building and racing electric cars, which began after he converted his BMW 3 Series into an electric car, as bne IntelliNews reported in 2016 following an interview with the company. Its founder won his first race against gasoline-powered cars in 2010 with the prototype, realising in the process that in order to create his electric supercar he’d need to develop most of the technology and know-how from scratch.

The Croatian company has won the attention of major international carmakers. Porsche took a 10% stake in Rimac Automobili in 2018 as part of its electrification efforts. More recently, South Korean carmaker Hyundai Motor Group signed a €80mn strategic partnership deal with Rimac Automobili, according to which the two companies will collaborate on the development of two high-performance electric vehicles by 2020.

Investors hot for corona Eurobond issues from Southeast Europe
Easing of lockdowns offers hope to emerging Europe’s COVID-struck economies
LONG READ: The Growers - a handful of countries in New Europe are coping with the coronacrisis and are still expanding