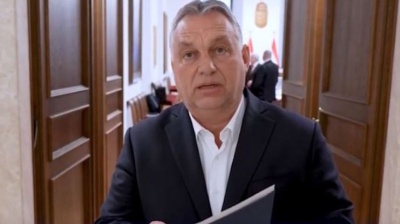 Prime Minister Viktor Orban's government has used its enhanced powers during the pandemic to accelerate the dismantling of democratic institutions and further enrich cronies, according to the report.
By bne IntelliNews January 26, 2022

Hungary slipped four notches to 73th place in Transparency International's 2021 Corruption Perceptions Index (CPI) ranking and remained the second most corrupt country in the EU after Bulgaria, according to the report published on January 25.

Ten years ago, Hungary was ranked 46th out of 176 countries in the CPI ranking, with a score of 55, which means the country has dropped 12 points and 27 places, the steepest decline among the 11 CEE countries.

Transparency’s CPI ranks countries in terms of the degree to which corruption is perceived to exist among public officials and politicians. It is a complex index, often called the “survey of surveys”, drawing on corruption-related data from expert and business surveys carried out by various independent and well-known institutions.

The government has used its enhanced powers during the pandemic to accelerate the dismantling of democratic institutions and further enrich cronies, according to the report. It restricted the disclosure of public data by issuing emergency decrees, curtailed the room of manoeuvre of local government, and awarded billions to crony entrepreneurs in the tourism sector without competition.

The government has further enriched business circles linked to the political elite by setting up public trusts, used in the semi-privatisation of universities. Under the scheme, the board of trustees of universities was filled with key government and party officials or business people close to the ruling Fidesz party, which ensures the ruling party can exert political and economic influence even it loses the election in April.

The report highlights the deterioration of media freedom and highlights the case of the last independent radio broadcaster, Klubradio, which lost its frequency.

Hungary's failure to boost competitiveness, ranked at the bottom end in the EU despite the global economic boom between 2013 and 2019, is largely a consequence of autocratic rule and institutional decay, said Jozsef Peter Martin, the Executive Director of TI Hungary after the unveiling of the second edition of the Black Book, a compilation of corruption-related cases from the last years.

The corruption case involving the former justice ministry state secretary Pal Volner was unveiled after the book went to press. The prominent Fidesz politician is charged with accepting HUF83mn (€230,000) in bribes for approving the appointments of bailiffs from the key figure of the case, Gyorgy Schadl. The head of the Hungarian Court Bailiffs Chamber, who is under arrest, allegedly sold the positions for money and collected some HUF883mn from bailiffs. All deny the accusations.

New details surface daily from the leaked 1,700-page report on the uncovered investigation by authorities. The wiretapped conversation revealed that Schadl allegedly used his contacts to help one of Volner’s family members and the cabinet chief of Cabinet Office minister Antal Rogan, one of the most powerful figures of the government, to pass law exams. Schadl has also allegedly asked favours from the Metropolitan Court of Budapest and the National Office to oust a bailiff out of his practice.

The biggest corruption scandal of recent years could become a key election campaign topic for the opposition. Pro-government media however is not reporting the story, instead it focuses on twisting comments by opposition PM candidate Peter Marki-Zay out of their context in targeted smear campaigns.