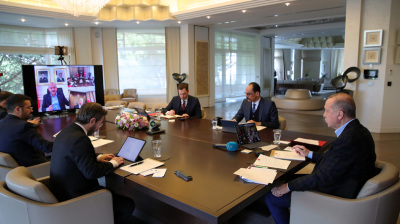 Turkey’s top business leaders are reportedly pressing President Recep Tayyip Erdogan to beef up his economic support plan to help companies through the impact of the coronavirus (COVID-19) pandemic and perhaps announce a strict lockdown to curb the worryingly fast spread of the outbreak in the country.

Erdogan nine days ago announced a Turkish lira (TRY) 100bn ($15.4bn) plan of support that includes tax cuts and loan payment deferrals. However, given that Turkey has a $750bn economy, critics see it as far from enough, with Moody’s having earlier this week warned that the country of 82mn is likely to be hit harder by the economic effects of the pandemic than any other G20 economy. That ominous warning is even more worrying taken together with the fact that an increasing number of academics are claiming that Turkey has done too little, too late to fight its COVID-19 outbreak and—in the words of columnist and scholar Cengiz Candar—“could be heading to the brink of catastrophe”.

The new pressure on Erdogan to do more has been brought to bear by board members of the Turkish Industry and Business Association (Tusiad) in a letter sent to the president, according to Bloomberg.

The contents of the letter have not been made public, but the news agency quoted a source as saying that Tusiad’s main concern was a lack of guidance from the government on how long the economy would be operating under a slowdown.

“Their call to the Turkish leader shows growing discomfort among the country’s most influential businesses as they seek support to offset the weakening demand at home and in export markets led by Europe,” the source was cited as saying.

The Tusiad board is said to have discussed recommending that the government announce a strict, national lockdown to more quickly slow the spread of the virus. Such a measure, while a hard medicine to swallow, would enable businesses to plan for a defined period of slowdown in the expectation of an accelerated rebound.

Hundreds of thousands of companies across the country have already shut down in the face of the pandemic but observers are anxious that millions of Turks are still forced to mingle while they journey to inessential jobs—the Turkish Medical Association (TTB) has called on the Erdogan administration to address this difficulty by providing workers with paid leave. Imamoglu pointed out that more than a million people had used public transport in Istanbul during the most critical period in the attempt at driving back the coronavirus.

One worrying episode that resulted from Turkey’s shutdown of almost all flights as part of its fight against the pandemic has stranded around 2,000 people at Istanbul Airport. More than half of the travellers stuck at the airport, one of the world’s busiest international hubs, were Algerian citizens, while others were from Uzbekistan, Turkmenistan and Azerbaijan, according to airport operator IGA. It added that Turkish Airlines and Turkish Red Crescent were providing meals and essentials for the people stuck at the airport, Unverified video footage posted on social media appeared to show scuffles between police and passengers wearing medical masks at an Istanbul Airport terminal building.

Turkey’s officially recorded number of COVID-19 infections rose by 1,196 on March 26 to reach 3,629, with 75 related deaths. The country reported its first infection as late as March 10, but many observers doubt the veracity of the official data.

Reuters on March 26 quoted Sinan Adiyaman, chairman of the TTB, as saying that Turkey’s “[…] test numbers [for COVID-19] are low. We were certainly not prepared. Countries that are ready must have high test numbers”.

The government has insisted it took timely measures to delay the outbreak but Adiyaman said Turkey was slow on some steps, including suspending sports leagues and quarantining those coming from abroad, especially thousands returning this month from an Umrah pilgrimage.

“Around 200,000 people arrived from abroad since the outbreak began, and they were just given a simple fever test and released across Turkey in an uncontrolled manner,” he said. “You cannot fight a pandemic this way.”