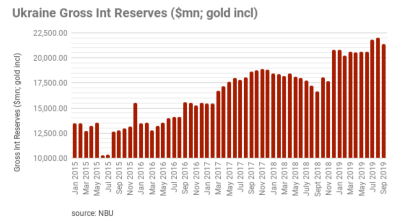 Ukraine’s gross international reserves declined 2.6% m/m, or $577mn, to $21.4bn in September after increasing 0.8% m/m in August, the National Bank of Ukraine (NBU) reported on October 7. The decline was due to high repayments on state debt.

State spending in foreign currency was partially compensated by receipts from the placement of local Eurobonds for $547mn. In addition, the favourable situation on the local FX enabled the NBU to intensify foreign currency purchases for replenishing international reserves. In September, such purchases amounted to $930mn in the absence of foreign currency sales by the NBU.

The government is well funded at the moment and after rising strongly all year, the share of foreign investors in the local bond market stalled in August after the Ministry of Finance started squeezing yields and offering only longer term bonds. At the same time the ministry is scaling back the amount of local bond issues denominated in FX to reduce its FX risks and encourage investors to invest into hryvnia denominated debt.

The central bank also reported a decline in the value of its securities portfolio of $80.8mn (adjusted to market value and the currency exchange rate).

As of October 1, Ukraine’s gross reserves amounted to 3.4 months of imports, the NBU said.

“The September decline in gross international reserves was expected as the capacity of the local market for generating foreign currency supply was not enough for compensating the currency outlays in the peak months of foreign debt repayments,” Evgeniya Akhtyrko of Concorde Capital said in a note. “This month is relatively easy in terms of state repayments in foreign currency. MinFin is to spend $476mn on redeeming and servicing local Eurobonds in October. Meanwhile, the government isn’t planning any placements of local Eurobonds through the year end, which could have drawn foreign currency receipts for replenishing the international reserves.”

The situation on the local FX is not likely to be favourable for NBU FX purchases. So far this month, the national currency –, which enjoyed almost a year-long period of appreciation – began to quickly lose its strength. In the first week of October, the NBU had to spend $200mn for smoothening out the excessive demand for foreign currency at the market.

“In the absence of new borrowing in foreign currency and with the low likelihood of NBU ForEx purchases, we expect gross reserves to lose another 2-3% in October,” said Akhtyrko.