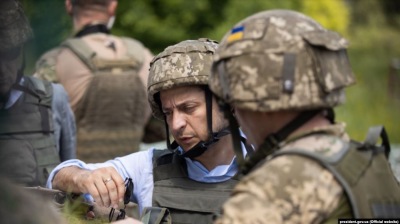 "There is no capitulation. No surrender of Ukraine's national interests. No agreements and global steps without the consent of the people of Ukraine," Zelenskiy said in a statement aired in the evening of October 3. "Only the return of people and our territories, the return of captives and the return of peace. We have a long and difficult road ahead to solve this problem."

The statement followed Kyiv's agreement to approve the so-called Steinmeier formula of the Donbas peace process earlier this week, which triggered small street protests of nationalists and war veterans in Kyiv and other Ukrainian cities, as well as severe criticism from the parliamentary pro-Western and liberal factions.

Specifically, the parliamentary faction headed by former president Petro Poroshenko believes that "the signing of the Russia-authored formula de facto means an easing or even lifting of the sanctions on Russia".

The Steinmeier formula "drastically changes the sequence of actions stipulated by the Minsk Agreements and renounces the Minsk [peace] agreement's roadmap suggested by the joint stance of Ukraine, Germany, and France in the Normandy format. We will never agree to that. We feel solidarity with the present actions and calls heard from among veterans and we will not allow the ruin of the Ukrainian state," according to the faction's statement voiced by Poroshenko on September 2.

Ukraine's rock star and MP Svyatoslav Vakarchuk called the same day on Zelenskiy to give a clear answer in the context of the approval of the Steinmeier formula as to how Ukraine will defend its interests in the upcoming Normandy Four summit. "Elections without our full control over the border are not elections, but a sham," he said.

Meanwhile, Zelenskiy said in the statement that the greenlighted peace formula does not imply "that Ukraine recognises the annexation of Crimea and renounces Donbas". "Does it imply that elections in Donbas will be held tomorrow at the barrel of machine guns? No."

"This formula means only one thing - when the so-called law on the special status of Donbas should start working," he said. "Namely, after the local elections there, which will be held under the Constitution of Ukraine, the legislation of Ukraine, and after the publication of the OSCE report that the elections were held in accordance with international democratic standards. That's what Ukraine agreed with in Minsk."

"We have sent a separate letter to Mr. Sajdik confirming the position's agreement on the text of this formula. What's next? Elections in Donbas tomorrow? No. Next, there will be a meeting in the Normandy format [summit]. [...] My position on this issue is clear and it is in line with the position of all Ukrainians: we all understand that Donbas is Ukraine. Peace must prevail there, ceasefire must be completed and foreign military formations must be withdrawn."

"And elections should take place not at the barrel of machine guns, but under Ukrainian law, with the access of candidates from the Ukrainian political parties, the Ukrainian media and international observers, with the possibility of exercising their suffrage by all internally displaced persons," the president said. "We will discuss all this during a meeting in the Normandy format"

In September, Zelenskiy said that possible deployment of peacekeepers in Donbas must be limited to the Ukrainian-Russian border. "I feel extremely cautious about deploying peacekeepers in Donbas," he said. "I know that such issues and ways to deploy a peacekeeping mission have earlier been discussed. I am cautious because I do not want Donbas to share the scenarios of Abkhazia or Transnistria."

Zelenskiy added that he did not want peacekeepers to be stationed on the Donbas contact line "and never leave", adding that he would gladly agree to deploying peacekeepers on the border with Russia. "Please, we invite them to be there. This is where we see the assistance and peacekeeping mission," Zelenskiy said.

In 2017, then Ukrainian President Petro Poroshenko said that Kyiv favours the deployment of a full-scale UN peacekeeping mission in Donbas. However, the mission's purpose "should be not to perpetuate the Russian occupation and legalise the Russian military presence but ensure durable peace in certain districts of the Donetsk and Luhansk regions of Ukraine and fully restore our state's territorial integrity," Poroshenko said.

Kyiv also insisted that the UN mission should comply with the guiding principles of UN peacekeeping operations, which a priori rule out the participation of an aggressor country and a party to the conflict in it, which mean that the Ukrainian leadership opposes including the Russians to the mission.

Later, Russian President Vladimir Putin said Moscow is ready to back the possible deployment of the United Nations (UN) peacekeepers not only at the contact line between Ukraine's troops and pro-Moscow rebels, "but also in other places".

BREAKING: Ukraine cancels dollar bond sale after NBU governor resigns
5 hours ago
Moldova’s ruling Socialists accused of “abducting” MP after he defected to Pro Moldova
8 hours ago
Ukraine’s NBU governor Smolii quits under pressure from oligarchs
17 hours ago
Russian vote through changes to constitution in referendum, Putin cleared to rule until 2036
8 hours ago
Turkey hit by VW’s scrapping of auto plant plan and refusal by Europe to list country as safe for tourism
14 hours ago