Ukraine's GDP falls by 5.8% in January-August 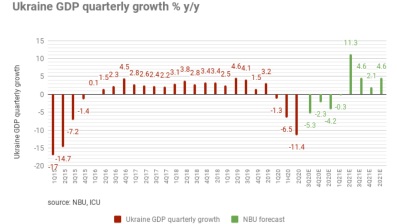 The decline in Ukraine's GDP in January-August 2020 will amount to 5.8%, the Ministry of Economic Development, Trade and Agriculture of Ukraine announced on October 12.
By bne IntelliNews October 13, 2020

Ukraine's GDP contracted by 5.8% in January-August 2020, the Ministry of Economic Development, Trade and Agriculture of Ukraine announced on October 12.

"In August 2020, against the backdrop of continued adaptation to activities amid a soft quarantine, almost all types of economic activity showed a slowdown in the rate of decline, and some even growth, in particular, the retail segment of the market and construction," the agency said on its website.

The Ministry of Economy clarified that in January-August 2020, the consolidated production index slowed down to 6.5% compared with 7.3% in the seven months of this year. According to the ministry, some types of industry showed positive dynamics, in particular the production of consumer durables, as well as construction, transport, trade and agriculture.

The ministry explains the activation of trade by the implementation of deferred demand, its reorientation to the domestic market and an increase in wages, and agriculture, by the active phase of harvesting in all regions.

Among the negative factors affecting the economy, the ministry notes a low investment activity, among the positive ones – adaptation to quarantine conditions, maintaining a relatively high purchasing activity, and a favourable situation in the world markets.

Meanwhile, the Ministry of Economy separately highlights the downward dynamics in agriculture, which will retain its influence until the end of the year. In particular, the matter concerns a lower, compared to last year's record, harvest of grains, a number of vegetables, fruits and oilseeds, the review says. According to the ministry's estimates, agriculture "sank" by 5.5% in August, compared with 5.8% in July and 11.8% in August 2019.

Meanwhile, the International Monetary Fund (IMF) said on October 13 that it expects Ukraine's GDP for the entire year 2020 to decline by 7.2%, a lower figure than 8.2% projected by the IMF in June.

Ukraine’s ruling Servant of the People Party's honeymoon is over after it loses ground in regional elections to local incumbents
The billionaires club, where the mega-wealthy go to meet each other
FPRI BMB Ukraine: KIIS’ survey of Ukraine’s perceptions of parties and politicians

World Bank forecasts Serbia’s economy to shrink by just 3% as it benefits from the Western Balkans’ biggest stimulus package and a low share of tourism in the economy.

Worst losing streak since 1999. Goading of EU leaders and daring US to hit Ankara with sanctions not helping amid the economic indigestion.

Economic development was mainly supported by the service sector and primary production, but their recovery also slowed in September, as real disposable incomes go negative again

The board of the Central Bank of Russia (CBR) at the second last policy meeting of 2020 on October 23 resolved to keep the key interest rate unchanged at 4.25%, in line with expectations.

The government debt to GDP ratio for Estonia was 18.5% at the end of 2Q20, which was the lowest among the EU’s member states.