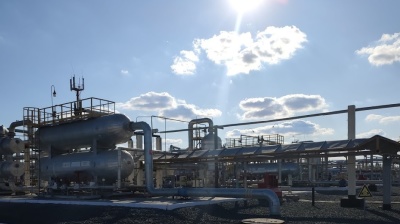 Uzbekistan under its new president Shavkat Mirziyoyev is a country gearing up for a bright future – or so they say. According to the seemingly youthful government, relaxation of its energy industry’s ownership has already created a bonanza of redevelopment projects set to be completed in the next five years. These projects, including energy generation and a general liberalisation of state ownership across the board, have injected a new lease of life into this Central Asian crossroads.

“We’ve had thirty years of nothing, and now with our new president we have to pull our socks up and invest our time and energy into our country,” said one local energy executive during a tour around Uzbekistan by the representatives of the newly established Energy Ministry. The young father of two taking a group of journalists around the far west of the country shines a light on a new generation of Uzbeks who have grown up only knowing the rule of the former president, Islam Karimov.

There’s a buzz around Tashkent, with several events occurring over the next few months highlighting investment in the country. The government has thrown itself into shining some light on this, the most populous country in Central Asia and arguably the region's most attractive investment destination. Similar campaigns have been run to promote the country’s tourism and cultural heritage in recent months.

The money being pumped into the country and into development of the cities and towns far away from the capital is obvious, including Nukus in the salted deserts in the far west of the country’s Karakalpakstan Autonomous Republic.

The Mirziyoyev government sees the relaxation of the rules for foreign investment as well as removal of visa requirements as one of key drivers to boost the image of the CIS country.

I am in Uzbekistan as part of the latest press trip organised by the Uzbek Ministry of Energy and Eriell Group. This latest push by the Mirziyoyev administration aims to secure foreign direct investment (FDI) in its ageing infrastructure, the majority of which dates back to the 1960s and appears to have received little, if any, investment in the decades prior to 2016, when the new president took over.

As part of the Tashkent current administration’s plans to boost energy generation and diversify the mix available to average citizens, the country is embarking on its first nuclear power station in co-operation with Russia that is supplying the technology.

In conversation with Uzatom, the new government-controlled agency in charge of the new nuclear sector, the decision was made with haste to begin the programme in 2018. That, along with the growing population and increased power consumption during summer months due to climate change, has led to a pressing need to overhaul pretty much the entire country’s infrastructure.

But Uzbekistan is serious about building a nuclear industry, with a new committee being created to facilitate and oversee its expansion over the next few years. It has also said that, despite the lack of interest from Western industry partners such as France and others, it would be building the first power plant with Russian experts. The common lingua franca of Russian, still prevalent in the country, would likely expedite the project as well.

“Uzbekistan is one of two double-landlocked countries…the other being Liechtenstein,” Energy Minister Alisher Sultanov told the press delegation on the serious issue of water use for the nuclear power plant (NPP). According to the minister, water from a nearby lake would be used for cooling the plant, with it then being treated. Uzbekistan was ranked at 152nd out of 180 listed nations in terms of water avaialblity, having 531.25 cubic metres of renewable internal freshwater resources per capita. Given its unique situation in Central Asia, the country is heavily dependent on its neighbours such as Tajikistan for water and carefully managing the flow for projects like the first nuclear power station is vital to its success.

During our trip around the country I repeatedly heard the phrase “value-added” by company executives and officials. Indeed, it appears that the process of squeezing out extra products from limited resources looks to be a key part of the president’s plans for reforming the economy. Money has been poured into the gas separation plant built upon the crest of a cliff of the long-forgotten Aral Sea, which now produces polypropylene, polyethylene and hessian bags for export around the region and further afield. And more divested industries, and their associated companies, are now under construction in the Navoi region.

Newly appointed Energy Minister Sultanov, whose recently formed ministry is based out of the building of the national oil and gas concern Uzbekneftgaz in Tashkent, said that his duty was to reform the energy mix of his country. From offloading non-core assets to splitting the main gas corporation into four separate companies, to allowing foreign players, including the likes of Total and others, to have a vested industry in the country, he said: “We see a lot of change in three years, we couldn’t imagine we would do this three years ago.”

In his interview with bne IntelliNews and other journalists Sultanov said that the country had implemented major reforms, including the unbundling of the gas giant, which is his ultimately responsibility, to create new gas exploration and upgrading infrastructure. He mentioned the situation in the country was previously one of complacency and noted that he had a lot of resistance from people with vested interests against disassembling the old set-up.

Digging deeper, Sultanov remarked:” We’re all human beings, I’m not blaming anyone, and we were used to the way the system operated and the first thing was to change ourselves.” He further noted that he believed that if a company was not going to survive the transition from pseudo-Soviet management and organisation, “Then so be it.”