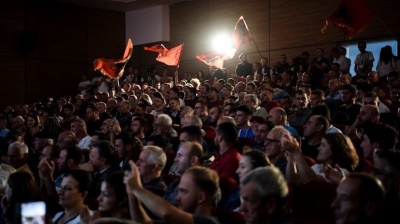 Vetevendosje supporters at a pre-election rally. Voters fed up with official graft and persistent poverty turned to the opposition in large numbers in the October 6 election.
By Valentina Dimitrievska in Skopje October 7, 2019

Kosovo’s opposition Vetevendosje and Democratic League of Kosovo (LDK) are most likely to form a new coalition government after the two parties won most of the votes in the October 6 snap general election.

The vote put the two parties on around one-quarter of the vote each with Vetevendosje slightly ahead, as voters fed up with official graft and persistent poverty turned to the opposition.

They are already talking about forming a ruling coalition together, which could lead to the Democratic Party of Kosovo (PDK) being excluded from government for the first time since Kosovo declared its independence from Serbia in 2008.

After 98% of the votes were counted, the central election commission said that Vetevendosje won 25.55% of the votes and LKD 24.86%. The PDK, part of the current ruling coalition, was in third place with 21.13%. Turnout was slightly over 43%.

Supporters of Vetevendosje celebrated in Pristina after results were announced. The party’s leader Albin Kurti said he plans to form a coalition with the LDK.

“I am forever grateful to everyone who cast their vote for changes. We have been waiting for this for a long time, but finally, it did happen to Kosovo,” Kurti said in a tweet following the vote.

The future coalition, according to political experts, needs to be stable and not fragile, so that the processes expected to be launched by the new government will have absolute support, broadcaster RTK reported.

Kosovan political analyst Arton Demhasaj was cited by RTK as saying that Vetevendosje and the LDK will probably exclude the PDK, but will allow the Alliance for the Future of Kosovo (AAK) of outgoing Prime Minister Ramush Haradinaj to join the government so that the coalition has an absolute majority and will be able to vote in certain laws with the required two-thirds majority.

“I expect the new government to be created shortly. Kosovo has much to do on its Euro-Atlantic path,” President Hashim Thaci said in a tweet.

EU spokeswoman Maja Kocijancic said that the new Kosovan government will face important tasks, such as working on economic and social development, the rule of law and the commitment to resume dialogue with Belgrade.

From fringe to mainstream

A party once better known for its angry rhetoric and teargas attacks in the parliament, Vetevendosje has come a long way to finally edge close to striking a coalition deal with one of Kosovo’s mainstream parties and forming a government.

Formed in 2005, the movement participated in a general election for the first time in December 2010 and gained 12.66% of the votes, winning 14 seats in the parliament.

In the 2014 elections Vetevendosje received 13.59% of the vote and was the third largest party in the parliament with 16 seats. After the election it appeared to be close to forming a government with the country’s main opposition bloc, but after months of political wrangling a coalition was formed between the PDK and LDK.

In the election held in 2017, Vetevendosje won the largest share of the vote and became the biggest party in the assembly with 32 seats. Again, however, it remained in opposition as a government coalition of the AAK, PDK and Nisma took power.

It was weakened in 2018, when 12 MPs quit, but rebounded in the 2019 general election. Most likely this will be the first time Vetevendosje will form a government and probably the first time the PDK will not participate in the new cabinet.

Party leader Albin Kurti, 44, is the favourite candidate for a prime minister, by some margin, followed by Vjosa Osmani from the LDK. Kurti, spoke about his next moves in an interview with Germany’s Standard ahead of the election, including on some of the critical topics for Kosovans: relations with Belgrade, and the 100% import tariffs on products from Serbia and Bosnia & Herzegovina.

Speaking to Standard, Kurti said he will remove the 100% tax but will seek reciprocity with Serbia and war compensation. Kurti also said if he becomes prime minister, the normalisation dialogue with Serbs in Kosovo — which has flagged during Haradinaj’s term as prime minister — will begin in the first week of the new government.

"We will replace the tax with the principle of reciprocity. Belgrade, for example, must accept our plates and the documents on which the Republic of Kosovo is written,” Kurti was cited as saying.

One of the movement's political points was holding a referendum on union with Albania. Asked if he is still in favour of the controversial Greater Albania concept, Kurti, who comes from an Albanian family, said he thinks that citizens should vote on unification with Albania this in a referendum.

"However, the referendum is not allowed, so I will respect the constitution until one day we are able to change it peacefully and democratically. And this is not expected to happen soon,” Kurti concluded.

The economic development of the country, education, health, social issues, the rule of law and fighting against nepotism are priorities for Kurti, he said. He has promised a radical reduction of the number of ministries to 12 from the current 21 and the halt of privatisation plans.