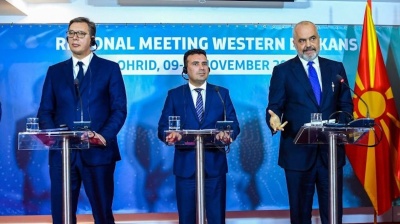 The leaders of Albania, North Macedonia and Serbia agreed concrete steps on November 9 on the initiative to eliminate obstacles to the free movement of people, goods, services and capital, with the final aim of securing EU membership.

The initiative was agreed following the EU summit in October at which France blocked Tirana and Skopje from starting EU accession talks. Serbia opened EU membership talks in 2014, but has to solve the Kosovo issue as a pre-condition to join the bloc.

Albanian Prime Minister Edi Rama, his peer from North Macedonia Zoran Zaev, the host of the meeting, and Serbian President Aleksandar Vucic met in Ohrid, during the two-day forum to discuss the initiative, also dubbed a “mini Schengen”.

The common market of the three countries is expected to increase the competitiveness of the entire region, which has 12mn inhabitants.

During the meeting, the three leaders agreed to allow free travel between the countries only using an ID card, and a common work permit that would allow people to work in all three countries.

Companies from each of the three countries will be able to bring in skilled labour from any of the three without additional procedures.

The free and fast movement of goods will be encouraged by the introduction of a 24-hour working time for all inspection services with a focus on phytosanitary and veterinary inspection.

All agreed steps will be included in the action plan, which should produce concrete results by the next meeting on December 21 in the Albanian city of Durres.

Zaev, Vucic and Rama said that this initiative does not mean the creation of a new Yugoslavia nor a Greater Albania, but a better life for the citizens of the three countries with the final aim being EU membership.

The Ohrid forum was attended on November 10 by Montenegrin and Bosnian officials to discuss regional issues. Kosovo's president did not attend.

During the meeting, Zaev, Rama and Vucic invited Bosnia & Herzegovina, Kosovo and Montenegro to join the initiative for setting up a free market.

Montenegrin Economy Minister Dragica Sekulic and the chairman of Bosnia’s Council of Ministers Denis Zvizdic said there is no consensus on the issue yet, but would consider joining the initiative.

Kosovan President Hashim Thaci cited several reasons for his absence. "First, Kosovo was deliberately overlooked by Serbia at the first summit of this new regional initiative," Thaci said in a Facebook post. The first meeting was held in Novi Sad, Serbia, on October 10.

He added that other reason is that Kosovo does not want to replace its Euro-Atlantic perspective with any regional initiative.

"And third, this regional initiative is meaningless as long as Serbia and Bosnia & Herzegovina do not recognise Kosovo's independence," Thaci said.

If all six Western Balkan countries agree to join the initiative, the Western Balkans common market will cover an area of about 20mn people.