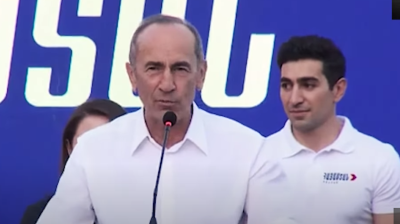 Kocharyan responded to Pashinian’s call for a debate by stating that while he was refusing to enter into a debate with Pashinian, he would accept a duel “with any type of weapon”. / REGNEWS, Screengrab.
By Neil Hauer in Yerevan June 18, 2021

From talk of executions to accusations of mental problems, Armenia’s election rhetoric has been dominated by all sorts of personal insults, with little about policy.

Three years after the small nation’s Velvet Revolution, Armenians are on June 20 going to their third parliamentary election in five years, and possibly the most competitive and consequential in the country’s history.

The official election campaign period began on June 7 and quickly descended into calls for “political vendettas”, accusations of alcoholism, and the waving of hammers.

With few exceptions, candidates shied away from any substantive discussion over the myriad of questions facing post-war Armenia — an ex-Soviet country that lost roughly 4,000 lives in last year’s Second Nagorno-Karabakh War with Azerbaijan and another more than 4,000 to COVID-19 and a nation that is facing what may be the biggest institutional crisis it has seen since independence. All of this has been compounded by an ongoing effort to secure the release of prisoners of war and a crisis around border delimitation with Azerbaijan.

Question of security
The first day of campaigning was dominated by the question of security on the Armenia-Azerbaijan border and POWs still held by Azerbaijan. Acting Prime Minister Nikol Pashinian did not take long to arouse the ire of his opponents by announcing that the captured soldiers — who, according to Human Rights Watch, have been subject to cruel and degrading treatment and torture in Azerbaijan — would “forgive [his government] for being held captive for two or three months”.

The following day, former Armenian president Serzh Sargsyan, who was deposed in the 2018 revolution and is associated with the I Have Honour Alliance opposition electoral coalition, called on Pashinian to exchange his son for “20 to 25 POWs”.

Pashinian hit back at Sargsyan, stating that he “officially declares” that he would be willing to make the trade and would be willing to hand his son over in exchange for “all the captives”. He added that he had instructed the “relevant state bodies” to pass his offer to Azerbaijani President Ilham Aliyev. Pashinian’s 21-year-old son, Ashot Pashinian, announced that he supported the exchange.

The Azerbaijani president, Ilham Aliyev, did not officially comment on the offer.

POWs for a map of mines

On 12 June, Azerbaijan released 15 POWs in return for a map of over 100,000 landmines laid in the Aghdam district of Azerbaijan, on territory formerly controlled by Armenian forces prior to the war.

The number of remaining Armenian POWs in Azerbaijan is disputed. According to Armenian officials, as of February, the Azerbaijani government held up to 240 POWs and detainees. Prior to this latest exchange, Azerbaijani officials stated that they held in captivity approximately 60 people, who they consider terrorism suspects.

While subject to withering attacks from his opponents, Pashinian also has not hesitated to attack his opponents. During a 8 June speech, the acting PM promised a “staff massacre” after the election, so as to rid the government apparatus of “Trojan horses”.

“The heads of institutions who have coerced their employees [to go to rallies or vote] in any way will be subjected to the most brutal, but political, vendettas,” Pashinian said, adding that it was “not about a physical vendetta” but a “political and civil one”.

On 13 June, Pashinian revealed a new election prop at a rally, a hammer gifted to him by one of his supporters. “With this [steel] mandate I will come after you,” he said at a rally.

Meanwhile, during a 9 June rally in Yerevan, Vahe Hakobyan of the Armenia Alliance coalition — led by its candidate for Prime Minister, Armenia’s second president Robert Kocharyan —said that the party would “cure” Pashinian of  “alcoholism” and “mental problems” and then will “judge him”. Hakobyan did not expand on what the “judgement” would entail.

A few days earlier, on 5 June, Kocharyan responded to Pashinian’s call for a debate by stating that while he was refusing to enter into a debate with Pashinian, he would accept a duel “with any type of weapon”.

“The contest has already been marked by a particularly vindictive and vitriolic first week of campaigning, based more on a heated confrontation of personalities than any real competition of policies,” Richard Giragosian, an analyst and the director of the Regional Studies Center (RSC), a Yerevan-based think tank, told OC Media.

“The political discourse of personal hatred and anger only undermines democracy in Armenia,” Giragosian said. “Nevertheless, although post-war politics remain poisonous and polarised, this election does offer an important way to overcome the political stalemate and provide a rare degree of legitimacy to whoever wins.”