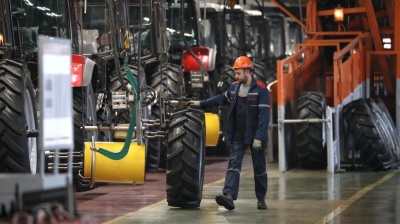 The Minsk Tractor Factory is famous throughout the CIS and is one of the biggest producers in the world
By bne IntelliNews June 26, 2020

The Belarusian government is on the hunt for foreign investors to modernise the Minsk Tractor Factory (MTZ), one of the biggest in the world.

Prime Minister of Belarus Roman Golovchenko called for raising foreign investment during a visit to the factory on June 26, reports BelTA.

“The enterprise should grow on. The most important thing now is to determine the maximum configuration, how much investment is needed, and what the payback will be,” Golovchenko said.

The public joint-stock company (OAO) MTZ is one of the world's top ten tractor manufacturers. It exports about 90% of the tractors it makes. MTZ employs over 15,000 people. Another 7,500 people are employed by the holding company MTZ.

According to the prime minister, a lot of work has already been done to prepare the concept for retooling the enterprise.

“We have to actually make a brand new factory. It will be difficult to accomplish because we don't want to do it from scratch, which would be easier. We have to preserve this platform, integrate new divisions into the existing structure of the enterprise,” the prime minister said.

MTZ is in negotiations with the world's leading vendors of equipment and technologies in order to secure profitable terms for the country.

MTZ's operation have been hurt by the coronacrisis and sales are down this year and the government is reviewing the operations to most of its leading companies.

Golovchenko has been on a tour of the leading enterprises and started with the maker of giant mining trucks MAZ earlier this month. MTZ is the second factory he has visited.

“I know MTZ very well. I am a guy from this neighbourhood, as they say, I used to live and go to school 200 metres from here,” the prime minister said. “But the most important thing is that these enterprises will produce substantial growth: they are a mainstay of the mechanical engineering industry.”

Serbia’s president claims foreign intelligence influence in anti-government protests
43 minutes ago
Famous ex-defence reporter arrested, accused of treason
16 hours ago
Turkmen President Gurbanguly Berdimuhamedov takes a holiday as WHO mission finally arrives in Ashgabat
17 hours ago
Violent clashes with police at thousands-strong anti-lockdown protest in Belgrade
1 day ago
Belarus presidential election to have no outside observers, opposition may united by a single candidate
1 day ago