BEYOND THE BOSPORUS: Foreign investors on the roller-coaster, Turks stick to ‘wait-and-see’ 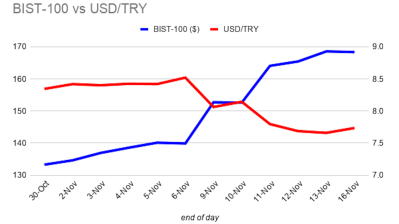 Locals traded FX both ways but their net holdings did not significantly change, according to cited bankers.

It’s not just deposit-holders who are suspicious when it comes to President Recep Tayyip Erdogan’s latest theatricalities in which he’s promised improvements in economic management, the approach to the judiciary and even human rights. The descendants of the early republic bourgeoisie are also not taking Erdogan’s charm offensive at face value.

“Even if you had an algorithm which put the 20 best economists in the world in charge of Turkey, it would not work,” Bahadir Kaleagasi of TUSIAD (Turkish Industry & Business Association) told the Financial Times on November 10.

“It’s not about temporary macroeconomic policy. It’s about the system itself,” he said.

“The system” here refers to Erdogan—and Erdogan has been reminding “Sleepy Joe” Biden since last week that he is a weathercock.

With highly-attuned self-survival instincts, he is even capable of piously changing the system, or himself, and everything else, such as by triggering the resignation of his son-in-law finance minister as he did the weekend before last, but will the US president-elect and the domestic power elites be okay with keeping the new-fangled Erdogan in place or will they demand fair elections that will bring about his end?

On November 11, Erdogan boasted that Turkey had registered portfolio inflows amounting to $2.7bn in the trading week so far, while Reuters on November 16 quoted unnamed bankers as saying that foreign portfolio inflows remained the main determinant in the final three trading days of last week.

We now have data from banking watchdog BDDK as of November 11. Foreigners’ lira-denominated securities kept at local banks (mainly domestic government bonds) rose by approximately $300mn from November 6 to November 11 (chart below).

FX deposits, meanwhile, moved up by around $1.5bn in the same period as record high levels were extended (chart below). We do not have the detailed data yet but this is interpreted as locals hanging on to their FX. The foreign inflows suggested by Erdogan seem to be here.

Alarm bells are ringing in the "FX share in residents' deposits". The year of 2001 is the peak to look out for (Charts above and below by @VeFinans).

On November 16, a BloombergHT headline read “Deposit rates at 2020 peak”. Give me a break. The Erdogan media doesn’t give people enough credit for their intelligence whether they are kidding or trolling.

Lira deposit rates for maturities up to three months rose to 13.30% as of November 6. Official inflation stands at just below 11.9% while a 5% deposit tax on maturities of up to six months is still in effect.

A quarter of Turks prefer to keep their savings in gold and FX under the mattress, according to the Turkey Saving Trends Survey for Q3 by ING Turkey. That’s been the most popular saving instrument among Turks for centuries.

Meanwhile, the proportion of those who can save still only stands at around 20%. Although that’s up from 14% in Q2, it means that 80% of the population do not have a chance to save despite rising anxieties over the future triggered by the coronavirus pandemic.

“A person works harder when s/he has debts,” Diyarbakir’s detained mayor Selcuk Mizrakli told bianet on November 11 from his jail cell.

An ordinary citizen, Ismail Demirbas, is also in jail right now after politely criticising the government in a street interview.

Street interviews have become too popular because the media is full of charlatans. No one talks about reality on film.

Demirbas, 49, is an atheist and he does not want to pay taxes for an Islamist government to steal and feed jihadists. He just wants the Turkish state to comply with the requirement for secularism in its constitution.

On November 16, the interior ministry launched an investigation into Istanbul mayor Ekrem Imamoglu in relation to his opposition to Erdogan’s Canal Istanbul mega project. At a cost of $9.8bn you would like to think it is needed and it is fine for the environment. It is neither.

Meanwhile, the charlatans talk and write about Erdogan’s latest commitment to judicial reform. Don’t get your hopes up there.

Turk Telekom (TTKOM) and Koc Holding (KCHOL) were also last week among the stocks attracting the most foreign players.

The figures on portfolio inflows and FX deposits during the past week will come out on November 19 at 14:30 via the central bank.

Turkey’s five-year credit default swaps, a popular instrument for trading Turkey risk without exposure to capital control shocks or short-selling bans/fines, tested the 390s last week. On November 16, they were hovering below the 400-level.

All eyes are on the November 19 monetary policy committee meeting. The result will be released at 14:00 Istanbul time.

“Out of the two, Turkey is definitely far more exciting to watch,” Piotr Matys of Rabobank told Reuters on November 16, referring to the upcoming central bank meetings in Turkey and South Africa.