BEYOND THE BOSPORUS: Pa! Sanctions, schmanctions! 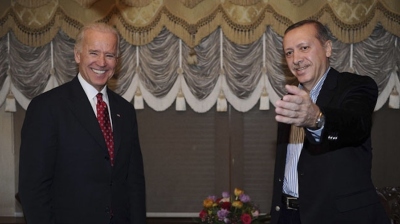 December 2011: Then US vice president Joe Biden at then Turkish PM Recep Tayyip Erdogan's home checking on how Erdogan was faring following some surgery. They talked about a partnership against terrorism, Iraq and regional affairs, but not about Syria, according to media reports.
By Akin Nazli in Belgrade December 9, 2020

“Sanctions on Turkey” articles have again been moving up the clickbait charts. Never mind the fact that the sanctions in question would not target the country but only individuals or individual institutions and that it would be helpful to have at least a basic discussion about the actual effectiveness of the US sanctions policy before rushing out reams of these articles.

Over its four years, the Trump administration has imposed sanctions at a record-shattering tempo of around three a day. Companies, individuals and even oil tankers have been slapped with the measure, Bloomberg reported on December 9.

“They’ve used these instruments, tariffs, export controls as a one-two-three punch going after people like China and others,” Adam Smith, a former senior adviser within the US Treasury Division’s sanctions unit, told the news service.

Trump at one point got around to sanctioning Turkey’s interior and justice ministers over the detention of American pastor Andrew Brunson, seen as a kidnapping by his evangelical backers in the US. The ministers were then seen grinning like Cheshire cats in front of TV cameras, proudly publicising their patriotism and thumbing their noses at American officials by pointing out that they had no assets in the US.

“We had by no means seen an administration so creatively use these numerous instruments in a seemingly coordinated method,” Smith observed.

So, what’s Joe Biden to do with Turkey? Ankara is suddenly playing ball with the markets and may go back to good behaviour, or at least better behaviour, in foreign policy, meaning the Democrat president will be able to find a role for it in his grand designs.

The US House of Representatives on December 8 approved the annual American defence spending bill. Fixed within it are mandatory sanctions aimed at Turkey over its purchase of S-400 missile systems from Russia. The bill went through on a 335-78 vote.

The bill also includes some sanctions targeted at Russia and it will allow the F-35 fighter jets ordered by Turkey to be transferred to the US Army (or, God forbid, Greece!) with Ankara barred from receiving them thanks to those menacing S-400 systems.

Donald Trump is threatening to veto the bill but not because he wants to help his pal and Turkish president, Recep Tayyip Erdogan, on his way out the door. No, he has his own reasons, but let’s not go into those here, the guy’s become such a yawn. Seriously, how much time have you got for a loser?

If the Senate approves the bill with a 2/3 majority, Trump gets a thump, as he can’t stop it becoming law. The Senate is expected to vote on the bill this week.

“Not later than 30 days after the date of the enactment of this Act, the President shall impose five or more of the sanctions described in section 235 of the Countering America’s Adversaries Through Sanctions Act (22 U.S.C. 9529) with respect to each person that knowingly engaged in the acquisition of the S-400 air defense system,” according to Section 1241 of the bill.

(1) the Government of Turkey and any person acting on its behalf no longer possesses the S–400 air defense system or a successor system;

and (3) the President has received reliable assurances from the Government of Turkey that the Government of Turkey will not knowingly engage, or allow any foreign person to engage on its behalf, in pursuing any activity subject to sanctions under section 231 of the Countering America’s Adversaries Through Sanctions Act (22 U.S.C. 9525) to reacquire the S-400 air defense system or a successor system,” the bill also states.

So, if the bill is approved by the Senate with a 2/3 majority earlier than December 20, Trump will be obliged to pick and mix five CAATSA sanctions for “each person that knowingly engaged in the acquisition of the S-400 air defense system” before he leaves his post on January 20 to make way for winsome Joe.

However, as we’ve observed already, US sanctions target individuals or individual institutions. They make no sense. They simply provide “the sanctioned person” with the opportunity of proclaiming what he patriot they are and reminding one and all that they are so smart that they don’t have any assets stateside.

And, if a certain institution finds itself sidelined by a sanction or two, Turkey will simply switch its business to another track running via another institution.

What should we conclude? The CAATSA sanctions story is just another version of the EU sanctions story. The media cranks up the headlines machine but those in the know shrug. Anyway, the Turkish markets are not short of a reason to create juicy volatility.

Manage to hit Erdogan meaningfully with a sanction and he’ll proclaim what a threat he must be to US colonialism and hegemony. But he’s in serious dire straits at home with his botched economy and he may have bitten off more than he can chew with his bellicose foreign policy. Right now he appears to be limbering up for a big bend over backwards to show Sleepy Joe just how useful he might still be.

Let’s end with some more of the deal from those CAATSA sanctions:

(1) The US President may direct the US Export-Import Bank not to give approval to the issuance of any guarantee, insurance, extension of credit, or participation in the extension of credit in connection with the export of any goods or services to the sanctioned person.

(2) The President may order the US Government not to issue any specific license and not to grant any other specific permission or authority to export any goods or technology to the sanctioned person.

(3) The President may prohibit any US financial institution from making loans or providing credits to the sanctioned person totaling more than $10mn in any 12-month period unless the person is engaged in activities to relieve human suffering and the loans or credits are provided for such activities.

(5) The following prohibitions may be imposed against the sanctioned person if that person is a financial institution:

(A) Neither the Board of Governors of the Federal Reserve System nor the Federal Reserve Bank of New York may designate, or permit the continuation of any prior designation of, the financial institution as a primary dealer in United States Government debt instruments.

Note: No Turkish institution is a primary dealer in US government papers.

(B) The financial institution may not serve as agent of the US Government or serve as repository for United States Government funds.

Note: (B) makes sense but not really so much as it would just ban a single bank or a few banks or financial institutions from keeping US government papers in custody.

(6) The US Government may not procure, or enter into any contract for the procurement of, any goods or services from the sanctioned person.

(7) The President may, pursuant to such regulations as the President may prescribe, prohibit any transactions in foreign exchange that are subject to the jurisdiction of the United States and in which the sanctioned person has any interest.

(8) The President may, pursuant to such regulations as the President may prescribe, prohibit any transfers of credit or payments between financial institutions or by, through, or to any financial institution, to the extent that such transfers or payments are subject to the jurisdiction of the United States and involve any interest of the sanctioned person.

(10) The President may, pursuant to such regulations or guidelines as the President may prescribe, prohibit any United States person from investing in or purchasing significant amounts of equity or debt instruments of the sanctioned person.

(11) The President may direct the Secretary of State to deny a visa to, and the Secretary of Homeland Security to exclude from the United States, any alien that the President determines is a corporate officer or principal of, or a shareholder with a controlling interest in, the sanctioned person.