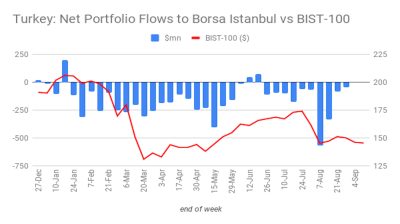 For the Turkish lira-denominated equities on the Borsa Istanbul, it is of course all about the USD/TRY pair right now with Turkey’s assailed currency stumbling to all-time lows almost day by day.

Short selling is not banned when it comes to the BIST-30 index components—the top 30 most traded stocks on the Istanbul exchange—but the uptick rule is in place, meaning you can only send a short-sell order at one level above the last effective price on the trading board.

In general, the Turkish government, the de facto dominant player on all of Turkey’s asset markets, is averse to short sellers. In July, it fined some brokerage houses exempted from the uptick rule. The exemptions enabled them to short shares on the Borsa Istanbul and they did so with gusto. Providing such exemptions to a few players on an organised market appears odd in the first place, however.

The government is also sensitive to the tacit need to keep the benchmark BIST-100 index above the 1,000-threshold. Even though the USD/TRY rate has been destroying all barriers placed in its path, the BIST-100 has stubbornly remained above the ‘glass floor’ since mid-May.

How so? The ‘success’ rides on one simple reason. Dollars are not required to play on the Borsa Istanbul and the Turkish central bank is certainly not shy when it comes to producing lira.

Rumours flare up about the so-called magic of the Turkish-lira denominated benchmark index on a daily basis, but there is a deficit of proof on the identities of the mythical buyers of billions of dollars worth of stocks shed by foreigners since the beginning of this year.

Local brokerage houses, including government-run Ziraat and Vakif, have been buyers on the Borsa Istanbul since the beginning of this year while Merrill Lynch has led the sellers. (Table by Garanti Invest)

The foreigners’ portion of leading Borsa Istanbul stocks has been in violent decline.

On August 10, the BIST-100 circuit breaker came into effect but there was actually no need for it to be activated.

A story got about of booming interest from individual investors but they are not interested in trading boards where foreigners are active since the foreign players have been heavily selling and the trading boards in question are deep enough to avoid such theoretical gains running in the 1,000%s. What’s more, newcomers trying the market lost money in USD-terms in August—although some of them are yet to become aware of the fact.

If you’ve not yet heard that foreign stock players have been fleeing Turkey, take heed without further ado: please keep away from the Borsa Istanbul. This market is only for adrenaline-seeking professionals as things stand.

How the once mighty flounder. Turkey is best not considered an EM anymore.

As institutional foreign investors have been selling Turkish stocks at whatever price they can fetch, fundamental analysis is not needed here. And the invisible hand who keeps the benchmark index at above 1,000 and the individual investors are definitely not in the market for any kind of analysis, fundamental, technical, or whatever.

The ratios of the Borsa Istanbul suggest it is really cheap, just as they have been suggesting for a few years. The market, it is true, has gotten cheaper, led by a one-time flagship banking industry. If you’re not au fait with the troubles of Turkey’s banks, suffice to say, please keep away from cheap cheese.

The Borsa Istanbul, established in 1985, is a large economic habitat. It has many stakeholders, including many domestic and foreign brokerage houses.

The brokerage houses produce many multiples of research reports for the market. So the stock exchange’s stakeholders are existentially in a position to act as if this is a real equities market. At the same time, it is currently not possible to rationally advise “Take profit” or “Sell short” at the moment, leaving the only option as “Buy”.

Although this column will not advise engaging in the Borsa Istanbul before the USD/TRY spiral takes a breather, we will provide those readers and subscribers, who cannot live without trading Turkish equities, with some real information in the upcoming period.

On September 7, Borsa Istanbul said in a filing with the public disclosure platform (KAP) that foreign entities sold a net $817mn worth of Turkish equities in August, bringing the total close to $6bn since the start of 2020.

The foreigners’ total transaction volume amounted to $31bn in the month as they bought $15.2bn of stocks while selling equities worth $16bn.

Foreigners sold a net $159mn worth of refiner Tupras’ (TPRAS) stocks last month, as well as a net $122mn worth of retailer Bim (BIMAS) and a net $84mn of private lender Akbank (AKBNK).

The share price of Spanish lender BBVA, which controls Garanti BBVA in Turkey, versus the USD/TRY rate inverted (by @58fatihsezer).

On the other hand, foreigners bought $37mn worth of Turkish Airlines (THYAO), followed by Arcelik ($16mn) and Anadolu Efes ($11mn).

Notably, although foreigners on the market have sold Borsa Istanbul equities at record levels since the beginning of this year, their share in the market has not fallen below 50%. The invisible hand also works here.

There are some stocks with very low free-float rates leading the biggest market cap list. These stocks are coincidentally held by foreigners. (Tradingview)

Foreigners’ share on the BIST-100 (by Yunus Kaya of local brokerage Alnus).

“Foreigners have been selling. Selling, but foreigners’ share is always at 51%. Meanwhile, BIST-100 cannot lift its head due to sales by foreigners,” Kaya wrote on September 9 in a tweet.

For some clues on how the BIST-100 never falls below the 1,000-level, look at how on September 8 two of Turkey’s bankrupted top four football clubs, Besiktas (BJKAS) and Galatasaray (GSRAY), were among the top three traded shares in the BIST-100 components (chart below). They were up at just shy of the daily volatility limit of 10%.

The BIST-Sports index, composed of Besiktas, Galatasaray, Fenerbahce (FENER) and Trabzonspor (TSPOR), moved up by 31% from September 1 to September 7, daily Milliyet reported on September 8.

Fenerbahce led the gains, rising 56% over the same period, followed by Galatasaray with 18%, and Besiktas and Trabzonspor at 16%.

Most active stocks on Borsa Istanbul across the last three months.

Seker Invest expects the benchmark index to pursue its volatile course in September.

The net asset value of the most popular Turkey exchange-traded fund (ETF), the Nasdaq-listed and USD-denominated iShares MSCI Turkey ETF (TUR), fell to $177mn as of September 8 from $198mn as of March 31 and $380mn as of February 10.