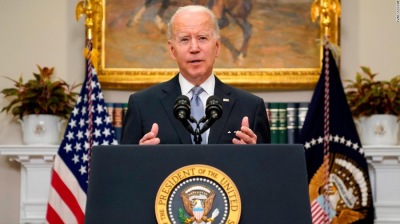 US President Joe Biden announced he was authorising an eighth $800mn military aid package to bring the total the US has sent to $3.4bn / wiki
By Ben Aris in Berlin April 21, 2022

US President Joe Biden announced he was authorising an eighth $800mn military aid package, only a week after signing off on a similar $800mn package, as Ukraine prepares for the Battle of Donbas that is expected to start in earnest any day now.

"We will never fail in our efforts to defend freedom and oppose tyranny," Biden said during a press conference in the White House Roosevelt Room on April 21.

According to a Pentagon readout, the new $800mn military aid package to Ukraine includes:

• Over 121 Phoenix Ghost tactical drones; and

The senior US Defence official said the drones had been “rapidly developed specifically by the US Air Force to meet Ukrainian requirements,” CNBC reported.

Biden added that not all the US assistance to Ukraine was being advertised.

The announcement of more heavy weapons will be welcomed in Kyiv. During his nightly video address the day before, Ukrainian President Volodymyr Zelenskiy said: "I am very pleased to say, with cautious optimism, that our partners started to understand our needs better ... And when exactly we need this. Not in weeks, not in a month, but immediately. Right now, as Russia is trying to intensify its attacks."

"The situation in the east and south of our country remains as severe as possible. The occupiers do not give up trying to gain at least some victory for themselves through a large-scale offensive. At least something they can 'feed' their propagandists with,” Zelenskiy added.

“We will do everything we can to bring to justice every Russian troop and commander guilty of war crimes. Every surname, every home address, every bank account – we will find everything,” Zelenskiy said.

US will send first flights of military aid from Biden's $800mn package to Ukraine within 24 hours; weapons should be in Ukrainian hands by the weekend, a senior US defence official told journalists at the briefing.

“Sometimes we will speak softly and carry a large Javelin, because we’re sending a lot of those in as well,” Biden said, referring to the hand-held “tank-busting” Javelin missiles.

Biden also said that he has used up his presidential weapons for conflict allocations and was sending a new weapons allocation request for Ukraine to Congress shortly that he hopes will be quickly approved.

The latest military package brings the total spent under Biden’s presidency to about $4bn, of which $3.4bn has been allocated since Russian President Vladimir Putin invaded Ukraine on February 24. Nearly half of that total – $1.6bn – has been approved in the last two weeks alone.

In addition to the $800mn of military aid, Biden said that he had also approved another $500mn of economic assistance to Ukraine to shore up the government’s finances, bringing the total economic aid granted to the Ukraine to $1bn since the war started.

“This is money the government can help use to stabilise their economy, to support communities that have been devastated by the Russian onslaught and pay the brave workers that continue to provide essential services to the people of Ukraine,” Biden said.

Biden said he had discussed the new assistance package in person with Ukrainian Prime Minister Denys Shmyhal, who is on a visit to the White House on the same day. Zelenskiy thanked the US via a tweet.

“This help is needed today more than ever! It saves the lives of our defenders of democracy and freedom and brings us closer to restoring peace in Ukraine,” Zelenskiy wrote in his tweet.

Answering questions from the press, Biden said the US has the military capacity to support Ukraine for "a long time." He said the most important factor for the West is "maintaining unity" on sanctions and economic isolation of Russia and that Putin has "failed" in Russia's "grand ambitions" on the battlefield in Ukraine.

"Putin is banking on us losing interest," Biden said. "He's betting Western unity will crack. It's not going to happen."

The situation in Ukraine on the ground remains very tense. Military deployment maps show that almost all the country is now free of Russian troops. Reports from Kyiv say that the Ukrainian army is now back in complete control of the Ukraine-Belarus northern border and the troops around Kyiv are gone.

The Russian forces are now entirely concentrated in the south and east along the land bridge that connects Crimea to Donbas and north of the disputed regions to Kharkiv in the middle of the Russian-Ukrainian border.

There is still intense fighting at the Azovstal metal works in Mariupol, where the hold-out defenders have defied two Russian ultimatums to surrender and save their lives and the 1,000 civilians – mostly women and children – that are also sheltering in the basements of the metal works.

During the afternoon of April 21 Putin cancelled plans to storm the Azovstal steel plant and is content for his forces to maintain the siege while taking control of the rest of the city.

"There is no need to climb into these catacombs," he says at a meeting with Defence Minister Sergei Shoigu, who had reported died last week from a massive heart attack. Putin hailed the Russia's "liberation" of Mariupol as the Russian army has all but destroyed the city during a two-month siege.

However, Putin told Shoigu to block off the Azovstal metallurgical plant, where the last Ukrainian troops are holed up, "so that a fly can't get in."

Biden said it is "questionable" whether Russia has control of the besieged city of Mariupol, where up to 100,000 civilians – about a quarter the city’s peacetime population – remain trapped in cellars and bomb shelters, unable to escape as the humanitarian corridors have not been operating for days.

"There is no evidence yet that Mariupol has completely fallen,” Biden said during his press conference.

Biden also extended the US package of sanctions to ban all Russian and Russian-affiliated ships from entering US ports "to further deny Russia the benefits of the international economic system.” The sanctions are an extension of the fifth package  of EU sanctions that have banned Russian ships from EU ports, excluding some categories such as grain, fertiliser and medicine amongst other essential deliveries.

Biden also announced a new visa programme that would expedite the entry of Ukrainian refuges “directly into the US from Europe,” Biden said.

“This new humanitarian parole programme will complement the existing legal pathways available to Ukrainians, including immigrant visas and refugee processing,” Biden said. “It will provide an expedient channel for secure legal migration from Europe to the United States for Ukrainians who have a US sponsor such as a family or an NGO. This programme will be fast, it will be streamlined and it will ensure the United States will honour its commitment to the people of Ukraine and need not go through our southern border.”

A day earlier on April 20 the US extended its fifth package of sanctions to include an addition 40 people and companies, closing more sanction-busting loopholes.

The latest list includes a Russian commercial bank, a virtual currency mining company, and Russian oligarch Konstantin Malofeyev, who is accused by US authorities of financing Russians promoting separatism in Crimea, RFE/RL reports.