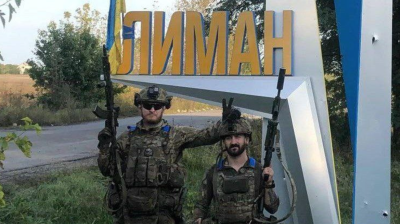 Ukrainian troops have successfully liberated the city of Lyman, which had been a Russian strategic logistics hub in the east. / bne IntelliNews
By Dominic Culverwell in Berlin October 4, 2022

Ukrainian troops liberated several settlements over the weekend in the east, including a critical victory in the city of Lyman on 1 October, just days after Russia announced the annexation of Russian-controlled territories in Ukraine. Ukraine’s southern counter-offensive also pushed back Russian troops from settlements in Kherson Oblast, with the village of Mikhailivka being liberated on Monday, 3 October.

The Ukrainian military advanced into Lyman, Donetsk Oblast, forcing Russian troops to leave after over four months of occupation, with the Russian Minsitry of Defence announcing a retreat to more "advantageous positions". US Defence Secretary Lloyd Austin hailed the liberation as a significant victory for Ukraine, as Lyman served as a logistics and transport hub for Russia to send troops and materials to the south and west.

“Without those routes, it will be more difficult. So it presents a sort of a dilemma for the Russians going forward," Austin said, Reuters reported.

The collapse of the Lyman line has allowed Ukrainian troops to advance, with reports that Borova in Kharkiv Oblast was also liberated on October 3, less than 20 km from the border with Luhansk Oblast. With the vast majority of Kharkiv Oblast back under Ukrainian control, Kyiv is now in a solid position to reclaim occupied territories in the Luhansk region, noted Serhiy Gaidai, the governor of Luhansk region. Ukrainian troops currently have a foothold in the direction of Lysychansk, next to Severodonetsk, Andrey Marochko of the self-proclaimed Luhansk People’s Republic stated on October 3.

Moreover, the withdrawal, which analysts speculate left behind many casualties, has led to increasing criticism from senior officials about Russia’s torpid military leadership, the UK Ministry of Defence reported. If Russia continues to lose the occupied territories, then public criticism will intensify alongside “pressure on senior commanders”, the MoD stated.

Experts believe that Russian President Vladimir Putin has been micro-managing Russian troops and is responsible for the weakened positions along the Lyman front line, leaving Luhansk Oblast vulnerable, the Institute for the Study of War (ISW) stated. Putin is instead keen to prioritise Russian positions in Kherson and Zaporizhzhia oblasts that have more strategic and economic advantages due to their ports, fertile fields and resource-rich land.

However, Ukraine is proving that its successes are not limited to the east, as Ukrainian flags were hoisted across several settlements in Kherson in the last few days. Ukrainian troops broke through Russian positions in the north-east of the region and liberated the settlements of Arkhangelsk and Myrolyubivka over the weekend and Mikhailivka on Monday.

The losses have led to internal fighting among Russia’s higher powers, particularly after Putin’s chaotic orders to partially mobilse Russian conscripts and annex the occupied territories, which have been openly criticised by Kremlin propagandists. Even Putin’s close ally, Chechen leader Ramzan Kadyrov, published a virulent criticism of the Lyman defeat, attacking the commander of the Central Military District (CMD), Colonel-General Alexander Lapin, and ultimately harming the Kremlin’s narrative that downplayed the loss. Evgeniy Prigozhin, the founder of the mercenary Wagner Group, backed Kadyrov, which inadvertently undermined Putin’s leadership.

“Kadyrov’s direct attack on Lapin is thus an indirect attack on Putin, whether Kadyrov realises it or not. Putin and his mouthpieces have been extremely tight-lipped about the performance of the military commanders or their replacements, which makes Kadyrov’s statement and Prigozhin’s echo of it especially noteworthy,” the ISW stated.

The Kremlin has escalated its rhetoric, threatening to use nuclear weapons. Kadyrov also called for tactical nukes to be used in Ukraine. However, US officials claim there is no merit to these threats. Nevertheless, it shows that Ukraine's battlefield victories, which have been aided by advanced weapons from Western allies, are having a profound effect on Moscow.

Ukraine began its successful counteroffensive last month in Kharkiv Oblast, which saw thousands of square kilometres return to Ukrainian control in a matter of days, including Izyum, a strategically important town in the region. Ukraine’s victories are imposing heavy psychological pressure on Russia as well as depleting its key logistics routes used to support operations in the Donbas, military strategist Mick Ryan noted, with Ukraine continuously repelling Russian attacks. The next few days will be important to determine whether Ukraine can continue to exploit Russia’s weaknesses, or whether Moscow will turn the tide once again.