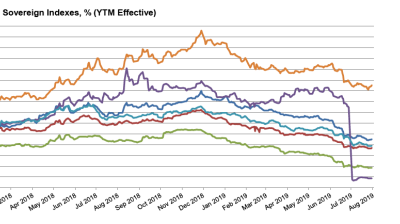 After dramatically bouncing back this year from a nasty sanction-inspired sell-off last year, it appears that bond investors into Russian Ministry of Finance ruble-denominated OFZ treasury bills have taken a pause, according to both Cbonds and ING.

Cbonds is a Russia based news agency that tracks bond issues around the world and published a chart this week that shows that while Russian sovereign bond issues were growing more strongly than in most emerging markets for this year, the number of issues dropped off dramatically in July to next to nothing.

Corporate bonds have been doing well all year but as bne IntelliNews reported earlier this month in its monthly Central and Eastern Europe (CEE) bond wrap report the summer doldrums are here and Russian issues of all sorts fell away in July.

As sanction fears fade Russian bonds have been very popular and were given a bump after the US Federal Reserve bank reversed its monetary tightening policy and cut rates earlier this year, making investors “risk on” again.

March was the biggest month for bond issues this year, accounting for 45% of all the bonds issued this year to date, a total of $13.5bn, including both corporate and sovereign bonds. The next best month was June with almost a quarter (23.7%) of the total.

Summer is always slow in the bond market as the chart of previous years' bond issues shows. However, this year seems especially bad. ING reports that the balance of payment numbers for July suggest a dramatic slowdown into foreign investors buying OFZs.

Last year non-resident ownership of OFZs hit an all time high of 34% in April, but as sanction talk increased investors sold off over RUB500bn ($7.2bn) worth of OFZs in case the Russian treasury bills got included in the next round of sanctions. As it happened they were not. The updated sanctions were imposed this month, but were limited to banning US investors from buying new sovereign issues in the primary market, but not in the secondary market. Moreover, existing debt was not included in the sanctions and OFZs were not mentioned at all.

The Ministry of Finance has issued record amounts of OFZ this year as part of its RUB2.5 trillion borrowing programme and also as a ruse to make imposing sanctions on OFZ more difficult. The more widely held OFZs are by foreign investors, the more difficult they are to sanction.

ING says there was a notable drop in the balance of payments figures in July that point to a dramatic slowdown in OFZ purchases in the last month.

“Preliminary data on July balance of payments support our view that the 3Q19 current account surplus will be fully sterilized by budget-rule-related FX purchases and net private capital outflows, while foreign portfolio inflows into state bonds are weakening. This leaves the ruble vulnerable to risks of contagion coming from global markets,” Dmitry Dolgin, chief economist, Russia, at ING said in a note. 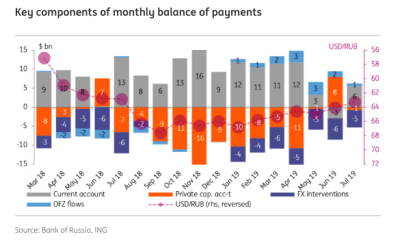 The preliminary balance of payment data suggests that the Russian current account surplus totalled $5.6bn in July, which flow-wise was offset by $4.7bn of FX purchases conducted by the Central Bank of Russia (CBR) for the finance ministry according to the budget rule, and the $0.7bn net private capital outflow, reports ING. So far it remains unclear whether the capital account benefited from a $5bn sale of Sberbank's Turkish asset, Denizbank, as the payment details are not available yet.

The budget doesn't see much of the money coming in from oil exports and of the estimated $5bn-$8bn current account surplus, around 80% of it is sterilised and sent to the National Welfare Fund (NWF), which doubled in size earlier this month after the Ministry of Finance transferred last year’s oil revenue surplus to the fund from its temporary accounts.

“The key takeaway is that the balanced corporate flows reinforce the dependence of ruble performance from the portfolio flows into state bonds (OFZ),” Dolgin said.

The last Ministry of Finance data for July puts the issuance of OFZs at RUB8.3 trillion, of which non-residents own just over 30%.

“The preliminary data on foreign portfolio inflows into OFZ for July also confirm our expectations of moderation to under $1.0bn monthly inflows in the coming months,” Dolgin says. “According to CBR's recent report on financial market risk, following the $1.5bn-$3.5bn monthly inflows in February-June, the OFZ market saw only a $0.6bn inflow in July. This was due to the fact that following the very successful 1H19 placement the finance ministry reduced the weekly supply of OFZ at the primary auctions to just RUB20bn per week ($1.2bn-$1.6bn per month) at the beginning of 2H19.”

“The reduced supply going forward supports our positive view on the benchmark yields but also limits the potential portfolio investments, especially given that foreign investors have restored their positioning in OFZ following the 2018 sell-off,” says Dolgin.

Turkey warns local lenders to accept borrowers’ requests to delay repayments
Czech industrial production down by 25% y/y in May, up 13.8% m/m
Albania’s annual CPI inflation slows to 1.8% in June

New rules on masks and social distancing introduced after WHO visit look suspiciously like those used to contain coronavirus but Turkmenistan still claims to have no cases at all.

Protests in Bulgaria expand to more cities, get support from US embassy

"No one is above the law," said US embassy statement, as tens of thousands rallied in Bulgaria's biggest cities on July 13, demanding the immediate resignation of the government.

Duda’s victory is expected to pave the way for the ruling right-wing coalition, led by PiS, to continue with its reformist – if hugely controversial and divisive – agenda.

The timing for yet another fuel spill is unfortunate as the company is contesting RUB148bn ($2.1bn) environmental damages estimated by the RosPrirodNadzor watchdog.

CHF1mn support plan to help fencers and fencing federations through the coronavirus pandemic that forced a halt to the sport.