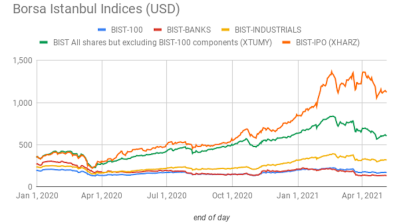 The prices of shares featuring in Borsa Istanbul initial public offerings (IPOs) have since last year become locked at their price ceiling for many days. Lately, the price ceiling spell has been broken, but the IPO pipeline is still producing new offerings.

(See table at the bottom of the page for full list of held and upcoming IPOs).

Tureks Turizm (TUREX) was responsible for breaking the spell. The share price of Tureks has drawn a pyramid with a lower right-hand tail.

On April 15, the sixth post-IPO trading day, a would-be career high-flyer (below) sold a heavy stake in Tureks on a short. He and his brokerage house explained that the move was an error. 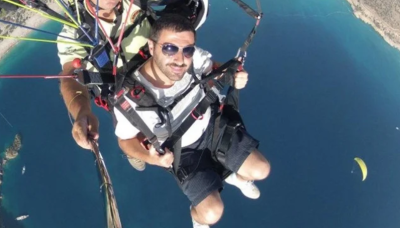 To correct this apparent mistake, the trader replaced his missing shares by buying back in on the trading board. But he had to buy back at lower prices than he sold for in the short.

For three months, he will, at the regulator’s direction, not be able to sell shares short, trade on credit or convey transaction orders via the internet. It seems that these punishments are seen as sufficient. The Capital Markets Board (SPK) has not announced any further action.

Selling a stock short on the Borsa Istanbul if the stock is not a BIST-50 index component is actually forbidden.

On April 26, Murat Dogu, deputy head of financial affairs at Dogan Holding, said in a stock exchange filing that he sold 94,481 Galata Wind shares in a price range of TRY5.75-5.80.

On April 27, Dogan Holding CEO Caglar Gogus said in a separate filing that he bought 99,830 Galata Wind shares at TRY5.36 per share.

On April 28, Dogan Holding said in a stock exchange filing that it would buy back a Galata Wind stake of up to 1.5% at prices below the IPO price for a total consideration of up to TRY41mn.

Since then, Dogan has been buying back shares, which it sold for TRY5.06 in the IPO, at lower prices.

On May 3, business daily Dunya blamed the last four energy company IPOs, namely those of Galata Wind, Aydem Enerji, Biotrend and Can 2, for breaking the post-IPO “ceiling-upon-ceiling” cycle.

This happened because these IPOs were bigger than the previous ones.

The record for getting locked at the price ceiling following the opening of market trading belongs to Turk Ilac (TRILC).

The IPO price for Turk Ilac shares stood at TRY10. The shares are currently traded in the TRY39s after seeing TRY73.6 on the 20th trading day.

In the biggest IPO so far, government-run Ziraat REIT (real estate investment trust) raised TRY1.88bn from the sale of a 25% stake.

On April 21, Dunya reported that to date this year 19 companies have raised an overall TRY4bn via rights issues on the Borsa Istanbul.

In 2020, around 40 companies held rights issues on the stock exchange, BloombergHT reported.