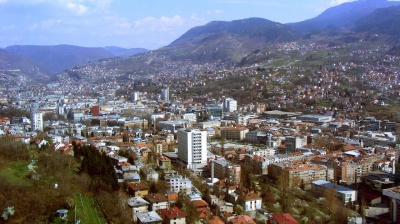 Opposition parties made a major breakthrough in Bosnia & Herzegovina, winning in its two largest cities for the first time in years in the November 15 local elections.

The result was a significant blow to the nationalist parties in Bosnia, which have not lost an important vote for years and faced few challenges to their rule.

A coalition of moderate parties won three of the four mayor’s offices in the capital Sarajevo, with the Bosniak Party of Democratic Action (SDA) holding on to only one, according to newswire reports.

According to preliminary data from the central election body, CIK, around 50% of the 3.1mn registered voters cast their ballots, choosing between 543 political entities, including 129 parties and 262 independent candidates.

“We have lost in Sarajevo but we have won across the country,” Bakir Izetbegovic, the leader of the SDA, the main Bosniak nationalist party, wrote on Facebook.

The main Serb party, the SNSD, claimed that despite losing in Banja Luka, it won the election in Republika Srpska.

Bosnia consists of two autonomous entities – Serb-dominated Republika Srpska, where the SNSD ruled for years, and the Muslim-Croat Federation, where the SDA and the main Croat party – HDZ BiH – are the main political players.

Critics of the SDA say Izetbegovic should resign after losing in Sarajevo. In response, Izetbegovic said he sees no reasons to resign and explained that his party lost in Sarajevo as all opposition parties have united against the SDA.

The leader of the SNSD also claimed his party did well in the election, as it has one more mayoral seat across the country compared to the previous local election.

The election results in Bosnia are seen as part of a wave of change across the Western Balkans, where in neighbouring Montenegro a coalition of opposition parties recently ousted the Democratic Party of Socialists that has ruled the country for three decades.

“The wave of changes has expanded from Montenegro to Bosnia & Herzegovina,” said Dritan Abazovic, the leader of Montenegro’s liberal United Reform Action (URA) movement, which is part of the new ruling coalition.

However, the vote was marred by numerous irregularities, according to N1. In the town of Doboj, around 200 people gathered to protest against alleged election fraud, while the Democratic National Union (DNS) declared it was pulling out of the election in the town due to the numerous irregularities. Several members of the party were arrested for breaching the laws by gathering on election day. The party’s leader, Slavko Gligoric, said that the party will file a claim against the local election committee.

In Eastern Sarajevo, the police arrested three people on suspicion of buying votes. There were several other suspected cases of vote buying across the country.

Voting took place across the country except in the city of Mostar, which will vote for its local authorities for the first time in 12 years on December 20. Mostar is the only municipality in Bosnia where no local elections have been held since 2008, amid a dispute between Bosniaks and Croats over the composition of the city council.

Oligarchs trying to derail Ukraine’s privatisation programme, warns the head of Ukraine’s State Property Fund
9 hours ago
International Ice Hockey Federation (IIHF) has stripped Belarus of the right to hold the World Championship this year
11 hours ago
Russian opposition activist Navalny calls for supporters to take to the streets this weekend
21 hours ago
Armenia ‘to extend life of its 1970s Metsamor nuclear power plant after 2026’
18 hours ago
Turkcell denies any affiliation with $1.6bn loan in default extended by Ziraat Bank to Virgin Islands company
2 days ago