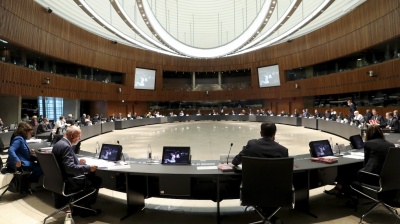 Bulgaria stuck to its firm position not to allow the launch of EU accession talks with North Macedonia at the EU General Affairs Council (GAC) meeting on June 22. This means fellow candidate country Albania’s progress is also blocked, as the two have been coupled together in the process and are not likely to be decoupled.

The Bulgarian position was re-affirmed at EU foreign ministers’ closed-door meeting in Luxembourg ahead of the European Council meeting on June 24-25, when the issue of EU enlargement will be discussed again. According to diplomatic sources, the presence of a caretaker government in Sofia and the upcoming Bulgarian general election in July further complicate the problem with the Bulgarian veto, imposed by the previous government.

Following the meeting, the Bulgarian foreign ministry issued a statement saying that the country reaffirmed its position on North Macedonia's EU perspective during the GAC meeting, while being open to a constructive dialogue with the forthcoming Slovenian EU Council presidency on finding mutually acceptable solutions for Skopje.

Bulgaria was represented at the meeting by Deputy Minister of Foreign Affairs Rumen Alexandrov. "Bulgaria continues its consultations with Skopje on the implementation of the Friendship Treaty. We approach this constructively and in good faith, but we expect North Macedonia to start implementing in practice the commitments made at the high-level meeting on June 17 in Sofia, which will allow us to move in a positive direction," Alexandrov said.

He explained that this includes the explicit rejection by North Macedonia of any territorial, minorities and historical claims related to Bulgaria, the change of inscriptions and monuments instilling hatred towards Bulgaria, and the launch of a process of rehabilitation for what he called “victims of the Yugoslav communist regime” who claim to be Bulgarians. North Macedonia, formerly known as Macedonia, is one of the six former Yugoslav republics.

Sofia also insists the implementation of the 2017 Friendship Treaty between Bulgaria and North Macedonia must be included among conditions in the future negotiating framework with Skopje.

At the same time, Bulgaria praised Albania's achievements in the reform process and reaffirmed its support for adopting the country's negotiating framework.

According to EU diplomats, considering Bulgaria's firm stance, there are no guarantees that Sofia will withdraw its veto even after the election. Currently polls put Boyko Borissov’s Gerb, whose previous government imposed the veto, neck and neck with political newcomer Slavi Trifonov’s political vehicle There Are Such People.

The biggest supporter for the launch of EU accession talks with Skopje was Germany, which insisted North Macedonia and Albania must stay coupled in the integration process.

German European Affairs Minister Michael Roth said in a tweet it is unacceptable for bilateral issues to hamper important decisions, such as the start of the EU accession negotiations.

“Let bilateral issues be handled bilaterally, without blocking the entire EU moving forward. Let’s think strategically and realise the need to fulfil our obligations towards Albania and North Macedonia. Now we have no interest in leaving a strategic vacuum there. Thank you,” Roth said in a tweet.

North Macedonia’s Foreign Minister Bujar Osmani was cited by MIA as saying that the chance for the country to obtain a date to start EU accession talks is “only theoretical” due to the complex political situation in Bulgaria.

Osmani said that only Bulgarian President Rumen Radev currently has a mandate and opportunity to remove the veto, which will mean the decision could be taken at the EU summit on June 24-25.

“I hope that Bulgaria will use the remaining days to think about our honest approach and to address the differences that divide us," Osmani said.

After meeting Osmani in Skopje, Swedish Foreign Minister Ann Linde said she is disappointed that North Macedonia will not start EU accession talks and called for strong diplomatic pressure to overcome the Bulgarian blockade.

Regarding Albania, the EU ambassador to Tirana, Luigi Soreca, was cited by Albanian Daily News as saying that it was the first time all EU member states have supported the launch of EU accession talks with Albania, including countries such as the Netherlands, Spain and Denmark, which were skeptical in the past.

“There is a clear intention of the member states to bring the two counties forward together because the regional dimension of the enlargement is very important,” Soreca was cited as saying, adding that the bloc “might need some more time” to discuss North Macedonia.

Soreca noted that decoupling is not very likely as the EU wants to see both countries going forward together.

The President of North Macedonia Stevo Pendarovski said on June 22 that the EU's key problem is a decision-making policy that requires consensus and that without changing this the EU cannot be a key geopolitical player.

Regarding the Bulgarian veto, Pendarovski said that if the price of joining the EU is for the country to lose its national identity, it does not need the EU.

Ahead of the Slovenian EU presidency, Slovenian Foreign Minister Anze Logar was cited by Euractiv as saying that the EU needs to move “as soon as possible” from a wait-and-see approach to a problem-solving strategy in dealing with enlargement and the Western Balkans.

“In recent years, the strategy of the EU towards the Western Balkan was a wait-and-see-approach, with the bloc not being too active in the region vis a vis reform stalemate,” Logar said, acknowledging that in the past decade, enlargement “has fallen off the EU’s agenda”.

North Macedonia has been a candidate country since 2005 and Albania since 2014. North Macedonia, previously known only as Macedonia changed its name under the 2018 Prespa name deal with Greece, to unblock the Euro-Atlantic integration processes.

The country became part of Nato in 2020, but faced another blockade at the end of 2020, when Bulgaria vetoed its neighbour’s EU integration process over language and historical issues.

Both Greece and Bulgaria have parts of Macedonian territory that they annexed in 1913 with Macedonian minorities that were never recognised by the two countries.