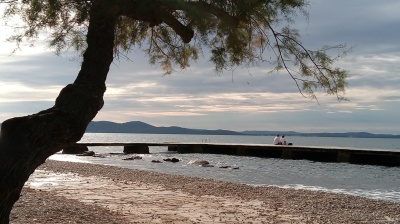 Countries along the eastern Adriatic coast reported a strong tourist season this summer, with numbers far outstripping 2020 and not far behind the pre-pandemic year of 2019.

With figures for the season now in, it’s clear there were some major changes in the source countries of travellers to the region as the continued presence of coronavirus (COVID-19) forced people to change their travel patterns.

Some notable changes were higher numbers of visitors from Germany and other Central European countries to the EU members Croatia and Slovenia. With tighter restrictions on travel to some EU countries, holidaymakers from the Western Balkans were more likely to stay within the region. And while the number of Russian visitors to Montenegro – once dubbed Moscow on Sea – was well up on 2020, there were also large numbers of Ukrainians holidaying in the country.

The question now will be whether some of the first-time arrivals in 2021 can be persuaded to return in future; as the pandemic recedes rival destinations in the Eastern Mediterranean, especially Turkey, will be accessible to larger numbers of travellers, and more holidaymakers are also likely to return to long-haul destinations next year.

Overall, as bne IntelliNews reported, countries along the eastern Adriatic coast reported strong tourist figures for the summer months as their tourism sectors rebounded despite rising coronavirus (COVID-19) cases towards the end of the summer. This followed a year in which the economies of Croatia and Montenegro in particular were devastated by the impact of the pandemic and spring lockdowns in 2020.

Croatia's tourist arrivals and overnight stays increased significantly in August compared to a year earlier, when the country restricted travel due to the pandemic, statistics office data showed on October 8. This year tourist numbers started growing year on year in March but improved further in the following months, almost reaching the level from 2019.

Many of them came overland from Central Europe, in particular Germany, Austria, Czechia and Poland, opting to travel to a destination reachable by car or train rather than flying. 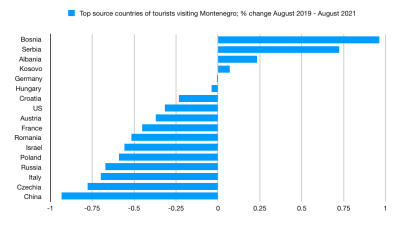 In Albania, the number of arrivals from neighbouring Kosovo was sharply up and there were also large numbers of visitors from Montenegro and North Macedonia. As soon as Albania lifted restrictions on travel from neighbouring counties this spring there were reports of Kosovan cars queuing on the border on their way to the coast. There continued to be large numbers of Kosovan visitors throughout the summer – a total of 795,880 in August, or approximately double the 356,327 who came in August 2020.

August saw a hike in arrivals from Montenegro even compared to 2019, and numbers were also up from the US, which has a large Albanian diaspora, Poland and Germany. Albania has become a popular destination for Polish package tourists seeking a cheap holiday in the sun, and numbers have increased in recent years.

Montenegro reported tourist arrivals at close to the pre-crisis level in both July and August. The largest numbers were from Russia, which accounted for 22% of all arrivals even though numbers were sharply down on 2019, Serbia (20.3%) and Bosnia & Herzegovina (15.3%).

Montenegro opened its borders to tourists from East European countries Russia, Belarus and Ukraine back in April. Two months later, Podgorica appealed to Moscow to lift restrictions and restore direct flights to save Montenegro’s summer season. And while numbers from Russia were down on 2019, there was a sharp increase in arrivals from Ukraine compared to before the pandemic. 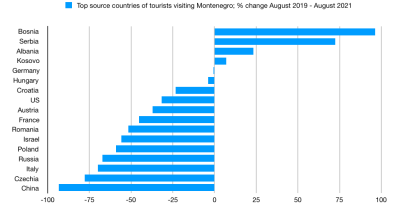