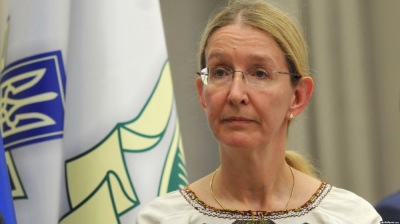 Now that it has secured a historic victory in Ukraine’s parliamentary elections, Zelensky’s government needs to bolster its actions to address these crises. Ukraine is dealing with a multiyear measles outbreak, as well as the second largest HIV epidemic in Eastern Europe and Central Asia. Even if Zelensky manages to address these issues, the long-term impact of chronic diseases caused by smoking (and emerging trends like e-cigarettes) could ultimately undermine his work.

With comprehensive and holistic reforms, Ukraine’s new president could demonstrate how a transparent, democratic system can succeed at the heart of the former Soviet bloc, offering a powerful rebuttal to Vladimir Putin’s narrative surrounding the supposed impotence of liberal democracies.

Corruption and entrenched interests at the heart of the system

As a health inspector in an Eastern European country explained to me, the region is set for a full-fledged healthcare disaster, with consequences for both demographics and global competitiveness. Low salaries for physicians drive “brain drain” and corruption, while poor policy choices prevent the modernization of regional healthcare systems. Bribery and corruption create a strong social divide, wherein the poor suffer and the rich can travel abroad to receive quality healthcare not available at home. Powerful entrenched interests in Ukraine have used their clout to stymie overdue change.

Ukraine’s American-born health minister Ulana Suprun, in office in 2016, has run up against those entrenched elites in challenging this corruption and making Ukraine healthy again. The low salaries of medical doctors mean it is “not uncommon” for patients to have to bribe them for better treatment. Insufficient pay also drives the country’s most competent physicians abroad. In Central and Eastern Europe, Ukraine ranks second-to-last in The Lancet‘s Healthcare Access and Quality Index. To convince the public his promises are genuine, Zelensky must address these divides and the corruption which drives them.

Indeed, corruption in the Ukrainian health sector is a matter of life and death. The culture of mistrust has dire implications for Ukraine’s responses to contagious disease outbreaks. The country has proven especially susceptible to disinformation regarding vaccines; the World Health Organisation (WHO) ranked Ukraine in a global top ten of countries with the largest rates of unvaccinated children, compounded by an epidemic of faked vaccination certificates.

That explains why Ukraine has been unable to corral a multiyear measles outbreak, with 54,000 cases last year and 35,000 new cases in the first three months of 2019. It also plays into Ukraine’s HIV infection rate, the second highest in Europe. Without restored public trust, Zelensky and his team will not be able to combat the disinformation – frequently spread by Russia-linked accounts – driving these high rates of infection.

Beyond measles and HIV, Zelensky’s reforms must also take a longer-term view of chronic diseases, especially those linked to smoking. Ukrainian smoking rates are higher than in many EU countries, and in the absence of laws regulating their usage and sale, Ukraine is particularly unequipped to handle the explosive growth of e-cigarettes or “reduced risk products” like Philip Morris International’s IQOS and Juul.

Besides creating nicotine addictions that push adults and teens towards smoking, there is solid evidence e-cigarettes have their own unhealthy impact on the body. E-cigarette brands, far from trying to mitigate this toll, have been caught regularly marketing their products to children and teenagers, continuing a long, sordid tradition among the traditional tobacco industry.

How the industry exercises influence in Kiev

Last year, for example, an investigation by the Campaign for Tobacco-Free Kids discovered dozens of violations of laws against tobacco advertising targeting children near Kiev schools. Meanwhile, Philip Morris is trying to recreate the Japanese success of “harm reduction products” like IQOS in Ukraine and across Eastern Europe. In Ukraine, this has meant promoting “IQOS-friendly” bars and restaurants, as well as having IQOS-branded sports cars roam the streets and IQOS-sponsored food festivals and fashion events target children and teenagers.

Zelensky has an opportunity to address these regulatory gaps and strengthen the country’s anti-smoking laws to meet European standards. He will, however, have to take on an industry skilled in thwarting precisely such regulatory objectives. The global tobacco industry has already funded a number of “free-market” think tanks in Ukraine, donating hundreds of thousands of dollars to organizations such as the Ukrainian Economic Freedoms Foundation to fund their work opposing regulations on tobacco and, more recently, e-cigarettes.

Industry lobbying has often succeeded in frustrating Ukrainian initiatives on tobacco taxes and advertising, and the tobacco industry has even used the Ukrainian government’s voice in international organizations to lobby against public health measures like plain packaging in countries like Australia.

By dissuading young people from unhealthy habits, the new government could reduce cancer rates and public health spending, all while improving Ukrainian life expectancy. Despite the war and the infectious disease outbreaks, cardiovascular diseases, cancer, and respiratory diseases remain the top three causes of death for Ukrainians.

It is not easy for a country at war to embark on difficult reforms, but the grassroots desire to fight corruption defined this year’s presidential and parliamentary elections. The Ukrainian health sector’s failures encapsulate both the shortcomings of the previous system and the demands of Ukrainians for a more equal society.

As Mathilde Dorcadie put it, the “healthcare system in Ukraine is in need of shock therapy.” It is now Zelensky’s job to administer the difficult, but necessary, treatment the Ukrainian health sector needs.

This opinion piece was prepared by Nicolas Tenzer,  the chairman of the Paris-based Centre for Study and Research for Political Decision (CERAP).

Decoupling from West to leave Russia as China’s junior partner

With the Ukraine war leading to a long-term economic rift between Russia and West, Russia is set to become dependent on a resurgent China, economists said on a Raiffeisen/wiiw panel.

MACRO ADVISORY: Ruble at 5-year high, how strong can it get?

Decoupling from West to leave Russia as China’s junior partner
1 day ago
MACRO ADVISORY: Ruble at 5-year high, how strong can it get?
5 days ago
COMMENT: Sanctions are working, but the West risks isolating Russian reformers instead of galvanising them
9 days ago
NEMETHY: Where are US markets? Where are they heading?
9 days ago
COMMENT: Constanta concerns
16 days ago