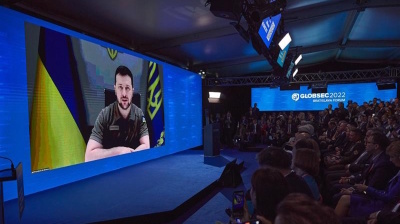 It’s easy to poke fun at the annual jamboree of Globsec, the Bratislava-based security think-tank that regards itself as Central Europe’s equivalent of Western Europe’s Munich Security Conference.

This year’s Globsec Bratislava Forum – attended virtually by bne IntelliNews last week –  was the first full-scale one since the outbreak of the pandemic and it was even bigger, brassier and more self-important than ever. There were three stages (one on a boat on the Danube), a bevy of presidents, premiers and ministers, including European Commission President Ursula von der Leyen and Ukrainian President Volodomyr Zelinskiy (via a live feed), as well the usual roster of participants with an over-representation of hawkish US think-tankers and arms company salesmen. Slick moderators were flown in from Western Europe or the US to lead all the sessions, even if their grasp of Central and Eastern Europe was sometimes shaky.

Also as usual, left-of-centre delegates and Putin compromisers were thin on the ground and – for understandable reasons this time – again there were no representatives from Russia’s establishment.

Ukraine naturally dominated the conference, and Globsec excelled itself by bringing Ukrainian government representatives (usually by live feed) to take part in many of the sessions and plead for EU candidate status and more Western aid. However, there was very little discussion of the practical problems of using Western aid to reconstruct the country after the war, given the oligarchic rule and rampant corruption that have blighted Ukraine since independence.

There was also a rather smug sense of ‘we told you so’ about the conference, with one session even called “I hate to say I told you so”.  The Baltic states and Poland do deservedly feel that their warnings about Putin were ignored for too long and that many in Western Europe are only belatedly waking up and smelling the coffee. Even the US – which most attendees see as much more important than the EU – has had to quickly swivel its focus back from Asia to face the Russian threat.

But problems within the CEE states – notably the erosion of democracy in Hungary and Poland – were once again passed over, and even on defence the record of the countries in the region is spotty. Many countries are only now starting to raise their military spending to the Nato recommendation of 2% of GDP. It has taken the Russian invasion for many CEE leaders to give up the old excuse of acting as a “bridge” between East and West and to cut their links with Putin, leaving Hungary’s Viktor Orban as the glaring exception in the EU. Within the region, moreover, not everyone is convinced by the West's case, as Globsec's own survey shows.

The conference would have been much more interesting if there had been some real discussion about the merits of reaching a peace settlement now and whether and how to rebuild relations with Russia in the future. But there were no speakers from the French or German establishment to put the case for compromise.

All the speakers were against a peace – or even negotiations – that did not aim to humiliate Putin, with regime change in Russia typically seen as the unspoken – or spoken – main goal of any peace settlement. In contrast to previous Globsec conferences, there was a feeling that the West is no longer on the back foot and that now is the time to press home its advantage.

Ukrainian Foreign Minister Dmytro Kuleba told the conference that there was no need to try to save Putin’s face, as his propaganda machine would paint any peace deal as a victory anyway. Latvian Prime Minister Krisjanis Karins said: “Anything less than a clear loss for Russia would mean…[Putin] waiting a few years and trying again. If we want peace, Putin has to lose.”

Such triumphalist sentiments – reminiscent of the “end of history” in the early years of the millennium – look very premature. But it is also far from clear that completely humiliating Putin is really in the West’s best interests. To prevent his defeat, Putin could decide to escalate the conflict to one with the West as a whole, risking world war. And even if he were defeated and then toppled, this could plunge Russia into chaos and lead to the rise of a new strongman who could be even more dangerous than Putin. These are the kind of worries that concern policymakers outside Globsec’s bubble, but they did not get a proper airing inside it.