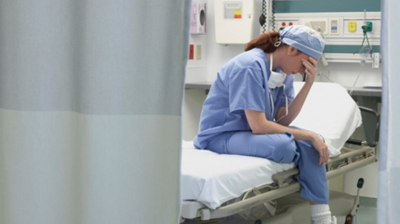 Still no end in sight for healthcare staff battling the coronavirus outbreaks in Turkey and Iran.
By bne IntelIiNews April 7, 2021

Turkey’s “third wave” explosion of coronavirus infections continued late on April 7 with the posting of an all-time high in newly recorded cases—while Iran, which earlier in the day also set a new daily record, announced that it had banned Turkey-bound tourist flights.

The neighbouring countries, both of which have a population of around 84mn, have suffered coronavirus resurgences since relaxing pandemic restrictions during spring, with Iran seeing a pronounced rise in infections in the wake of its two-week-long Nowruz Persian new year celebrations. The vaccination programmes in both Turkey and Iran are still at an early stage.

Last week Turkish President Recep Tayyip Erdogan announced a retightening of coronavirus restrictions, including the return of full nationwide weekend lockdowns during the Islamic fasting month of Ramadan, which starts on April 13.

Iranian Deputy Health Minister Iraj Haririchi complained on state television that some members of Iran’s coronavirus task force were to blame for the virus surge by “preventing us from using the golden opportunity of [the holiday] to extinguish the flames of the coronavirus”.

Last year, Iran’s Nowruz celebration was a muted affair because officials brought in tight restrictions on gatherings and the movement of people around the country. Haririchi said similar measures weren’t enacted this year because of some officials, whom he did not name. Millions of Iranians reportedly travelled to vacation hotspots across the country to celebrate the holiday, despite health guidelines warning them not to.

“Travel should have been stopped,” Haririchi said.

Iranian Health Minister Saeed Namaki on April 7 ordered all parks, restaurants, bakeries, beauty salons, malls and bookstores closed in Tehran. The capital and Iran’s other 250 cities and towns have been declared COVID-19 “red zones." Over 85% of the country now has the “red” or “orange” infection status, authorities said.

Earlier this week, Namaki warned of a further surge in the virus outbreak and said authorities had “lost control” over what he called “the rebellious COVID-19 dragon”.

A curiosity in the coronavirus data given by Iran and Turkey is that, while both countries have roughly the same number of inhabitants, and relatively young populations, Iran has to date reported 1,984,348 cases and 63,699 deaths with COVID-19, while Turkey’s figures are 3,633,925 and 32,943, respectively. That will add fuel to the fire for the many critics who claim that the official coronavirus data reporting of both countries has been very unreliable. Turkey in particular has been accused of under-reporting data.