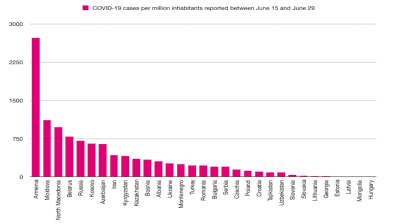 There are fears that a second wave of coronavirus (COVID-19) infections is already striking Ukraine and parts of the Western Balkans, Central Asia and the South Caucasus as the number of new infections rises sharply following an easing of lockdowns.

Along with Armenia – the worst affected country in the emerging Europe region in terms of the number of cases per million of the population – most of the countries now reporting a resurgence in the virus are among the poorest in the region and therefore less able than their peers in Central Europe to finance a lengthy lockdown.

The World Health Organisation warned on June 25 that Europe had seen an increase in cases in the preceding week for the first time in months as a result of lockdowns being eased.

At a virtual press conference WHO regional director Dr Hans Henri Kluge singled out 11 countries that were experiencing a "very significant resurgence”. All but one (Sweden) of these were in emerging Europe: Albania, Armenia, Azerbaijan, Bosnia & Herzegovina, Kazakhstan, Kosovo, Kyrgyzstan, Moldova, North Macedonia and Ukraine.

"For weeks, I have spoken about the risk of resurgence as countries adjust measures," said Kluge, as reported by the BBC.

"In several countries across Europe, this risk has now become a reality – 30 countries have seen increases in new cumulative cases over the past two weeks. In 11 of these countries, accelerated transmission has led to very significant resurgence that if left unchecked will push health systems to the brink once again.”

Armenia has 25,127 confirmed cases to date, according to WHO data published on June 29, which is 8,495 per million inhabitants or one case for every 118 people in the country.

In the last two weeks, Armenia has reported 8,063 new cases, or 2,726 per million of the population. 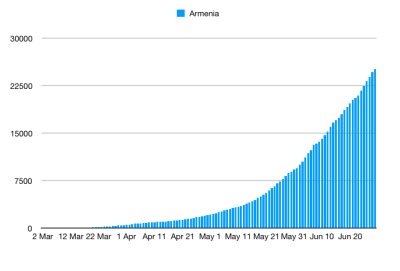 Total COVID-19 cases to date in Armenia. Source: WHO

Return to lockdown in Kazakhstan

Kazakhstan is preparing to return to a hard lockdown, as President Kassym-Jomart Tokayev ordered his government to prepare a new package of restrictions. The president sharply criticised officials for failing to convince the population to adhere to social distancing restrictions, necessitating a costly second lockdown. 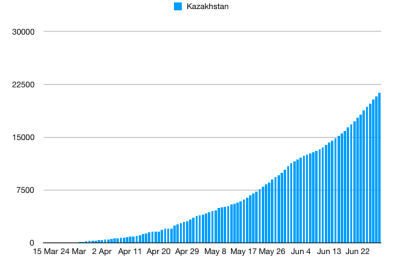 Total COVID-19 cases to date in Kazakhstan. Source: WHO

Kazakhstan was initially locked down on March 16. The lockdown was lifted on May 11, but several towns were told to introduce renewed lockdowns amid clear rises in their infection rates, while new health measures have been set in place, including closing down markets, restaurants and parks on weekends.

There are worrying signs that there could be more untested COVID-19 cases on top of those that have been officially confirmed.

The Kazakh capital Nur-Sultan has recorded a surge in pneumonia cases, the city's healthcare department chief Saule Kisikova told a briefing on June 25. The big growth in numbers might indicate that many coronavirus cases are going untested. Doctors are finding some 600 people a day with pneumonia symptoms, up from around 80 a day before the coronavirus difficulties began. Kisikova said the number of patients in hospitals had tripled within a week.

This contrasts with Ukraine, which reported a record 1,109 cases of COVID-19 on June 25. Ukraine has entered “a serious wave” of the coronavirus pandemic, Prime Minister Denys Shmyhal told a cabinet meeting the same day, warning of a worrying increase in occupancy of hospital beds. 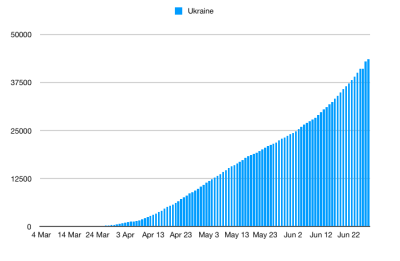 Total COVID-19 cases to date in Ukraine. Source: WHO

“We can state that the situation has significantly worsened,” said the prime minister, as reported by the pravda.com.ua news site. “Ukrainian doctors and epidemiologists are telling us about one main reason people stopped upholding restrictions. And local governments, in order not to lose political points, continue to weaken restrictions that remained at the local level.”

Kyiv is highly reluctant to send the people of Ukraine, one of Europe’s poorest countries, back into lockdown, and Shmyhal instead has urged people to wear masks, use disinfectants and respect social distancing. Meanwhile, the government is preparing its second wave of hospitals to accept the larger number of patients, he said.

Meanwhile, Kosovo’s Prime Minster Avdullah Hoti has warned the country could return to a strict lockdown if the number of coronavirus cases continue to rise.

"Cases of infection with COVID-19 are on the rise. … If this continues, we will be forced to return the measures of total isolation, which will have serious consequences for our economy and families,” wrote Hoti in a Facebook post.

There were similar warnings in Serbia, where President Aleksandar Vucic said on June 26 that the authorities could tighten restrictions again.

The Slovenian government has been preparing for a possible second wave of infections as cases rose in the Western Balkans and in neighbouring Croatia, while governments across the region are imposing or considering re-imposing travel restrictions.

Better news from Russia and Belarus

The two East European hotspots Russia and Belarus now have 641,156 and 61,475 cases to date, or 4,395 and 6,504 respectively per million inhabitants. They are also among the top five states in the region in terms of cases per million inhabitants in the last two weeks, but in both countries the first wave of infections has passed its peak.

In Russia, new infections dropped below the 7,000 mark on June 26 for the first time since the end of April. 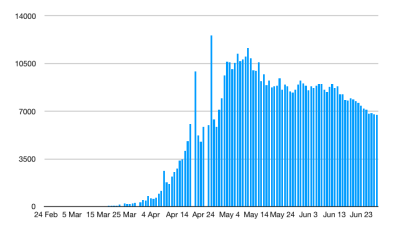 There are continued new outbreaks in Russia – among them one at diamond major Alrosa’s International mine that was forced to suspend operations – but overall the number of new cases is continuing its steady decline. 75% of Russians who were working remotely during the coronavirus epidemic are now back in their offices, RBC daily reported citing a study by Rabota.ru portal.

There is even more encouraging news from the Baltic states, Georgia, Hungary and Mongolia, where daily new cases remain very low.