DEATH OF THE SOVIET UNION: Strong institutions are better than a strongman leader 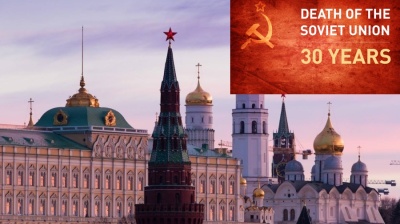 The 30 years since the fall of communism show that strong institutions have served the transition countries better than a strongman leader — despite a widespread belief to the contrary, according to panelists at a webinar organised by the Vienna Institute for International Economic Studies (wiiw).

Economists on the panel on December 15 looked at the widely divergent economic and political outcomes for the countries of the former Soviet Union and Eastern Bloc over the last three decades, exploring the impact of factors such as the incentive of EU membership, corruption and distribution of natural resources.

While there is a common perception in the post-communist world that what is needed is a strong leader, with the power to push through reforms, this “initial consensus … turned out to be wrong,” said Sergei Guriev, professor of economics at the Instituts d'études politiques in Paris (Sciences Po) and a former European Bank for Reconstruction and Development (EBRD) chief economist.

Instead, he argued that counties that moved towards the European model and joined the EU are those that have actually succeeded in reforming. “The big picture is that the EU anchor really matters,” said Guriev. “The roadmap for joining the EU and accession itself are really incentives for reforms, not only of economic institutions, also for sustainable political institutions.”

Guriev believes that even with the current challenges to democratic values in EU members Hungary and Poland, “their populist leaders are constrained by the European straitjacket and European institutions, which suggest this reversal [in democratic values] can be reversed.”

Olga Pindyuk, economist and country expert for Ukraine and the Commonwealth of Independent States (CIS) at the wiiw, agreed that having “strong institutional anchors really matters”, and for the countries that don’t have their own strong institutions, “second best anchors are better than nothing”. She listed, for example, Ukraine’s Stabilisation and Association Agreement (SAA) with the EU and the International Monetary Fund (IMF) programmes for the country.

The panel looked at both the divergence in GDP per capital terms— that has seen, for example, Poland shoot ahead of Russia — and the different political courses of post-communist countries.

Looking at the respective performances of several countries  — three that had colour revolutions and three that didn’t — on the Index of Electoral Democracy, Pindyuk commented: “I think can see really strong divergence of democratic transformation trends in former Soviet Union countries in recent decades. This creates more optimism for long-term positive socio-economic developments in several countries, primarily Georgia, Armenia and Ukraine.”

Among the countries under comparison, it isn’t coincidental that those that have failed the most to improve in democratisation, and have never experienced colour revolutions — Russia and Kazakhstan — are the richest in natural resources.

She identified the “commodity sector as a key sector in which rents are generated in many countries in the former Soviet Union … Russia and Kazakhstan suffer from the so-called natural resources curse. This structure of the economy makes it possible to seek rents in such an easy and fast way that an authoritarian power consolidates very fast and it’s really not possible to shake it up.”

What makes a successful reform

Guriev identified “a number of major mistakes made by post-Soviet reformers, not least a failure to communicate effectively to convince the public that reforms were needed.

Secondly, some reformers were corrupt, which immediately undermined the reforms in the eyes of the public. He argued that at the start of the transition, when people were living under “unfair equality” most people were in favour of “fair inequality” where people who work hard and create value get more money. What happened instead in many countries was “unfair inequality”, as people who had connections and broke the law made more money. This situation was worst in Ukraine and Russia, where institutional change allowed a small number of oligarchs to build huge business empires.

Honing in on Ukraine, Tymofiy Mylovanov, president of the Kyiv School of Economics, associate professor of the University of Pittsburgh and former minister of economic development, trade and agriculture of Ukraine, pointed out that most of the reforms carried out in Ukraine have not been sustainable. “We tried judicial reforms five times; it always got reversed,” he said.

Mylovanov, who worked on the recent land reforms in Ukraine, argued it’s not possible to impose democracy successfully, and that reforms need to be bottom-up rather than top-down.

"Democracy has to be earned, it cannot be imposed, that’s true for all institutions,” he says. The risk of simply building new institutions in, for example, Ukraine is that while they look good on paper, in practice “they immediately get captured by the same vested interests as were present previously”. Institutions “have to be created by the public rather than imposed by the government,” he stressed.

Somewhat ironically, the great bursts of reform effort in Ukraine have come not at a time when the country is stable and on a solid financial footing, but at times of crisis, a point made by both Mylovanov and Pindyuk.

“When Russia escalates, it reduces political infighting inside Ukraine,” said Mylovanov. “If you look at structural reforms which are done, they are done after some major event, for example a revolution or an invasion. When you destroy the status quo that opens up political space for major changes. Things need to be bad before they get better.”

Pindyuk described Russia’s impact on Ukraine as “destructive”, pointing to the damage to the economy following the events of 2014. However, she agreed that for Ukraine, crises have been a “blessing in disguise, they create willingness for reforms.”

This article is part of a series marking the 30th anniversary of the breakup of the Soviet Union. Read the other stories in the series here:

A green revolution brought the USSR down

Widespread nostalgia but no going back

Remembering Moldova's children of the Gulag

BOOK REVIEW — Reassessing the causes of the Soviet demise

STOLYPIN: The sick man of Europe

Is Putin ill? Is Putin mad? Is Putin about to be toppled by a coup? The rumour mill is grinding on overtime, and although most of the lurid claims are implausible to say the least, they do remind us of Putin's absolute control over the system.

One last act of selflessness and devotion to his nation is required of Turkish opposition leader Kemal Kilicdaroglu. He must forgo the opportunity of taking on Turkey’s despot and allow someone with box office appeal to take his place.

NEMETHY: How will the war in Ukraine affect Emerging Markets?

We have all heard the adage that a butterfly flapping its wings in the Amazon could affect the weather patterns on the other side of the planet. Might the war in Ukraine also have such unintended consequences?

COMMENT: Constanta concerns
5 days ago
Sberbank faces a meltdown from its vast commercial real estate loan book
8 days ago
STOLYPIN: The sick man of Europe
8 days ago
RIMMER: Turkey’s ‘Gandhi’ makes Erdogan ‘The Comeback Kid’
12 days ago
NEMETHY: How will the war in Ukraine affect Emerging Markets?
15 days ago