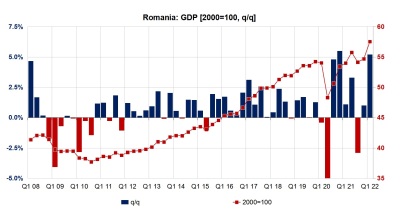 Households’ consumption alone pushed up the annual GDP growth by 5.1pp while the gross fixed capital formation and the inventory build-up contributed altogether only 0.5pp and the foreign trade had a neutral contribution on the utilisation side.

While confirming analysts’ expectations about the drivers behind the robust economic growth in Q1, the detailed data released by INS leaves many questions unanswered.

Thus, the robust growth (in real terms) of the IT&C sector was partly explained by the sudden (9%-10%) drop in the prices in the sector — both in q/q and y/y terms. How was this possible and what it says about the sector’s productivity remain unclear.

Separately, the prices of the goods used by the government on behalf of households (‘individual final consumption expenditure of general government’) plunged by an impressive 30% q/q, supporting a significant part of the 3.5% q/q real rise of private consumption.

Thirdly, the rapid change of the seasonality assumed by the statistics office from one quarter to the other — an effect of the seasonal adjustment model — creates puzzling effects that made analysts of major banks revise their projections quite sharply.

The statistical discrepancies are quite wide and the developments often defy intuition. This means that the separate dynamics of sectors fail to explain the dynamics of the whole GDP.

One good illustration of this effect was provided by the April retail sales data released recently: the food, non-food and fuels sales rose by 1.6%, 2.2% and 3.6%  respectively (m/m) while the overall sales figure edged up by only 0.3%.

In a similar way, the dynamics of the economic sectors would suggest an even stronger y/y growth rate - compared to the actual 6.5% rise. Such effects are normal for major one-off shocks (that divert the GDP from “normal” seasonal pattern) such as the pandemic lockdown or the surge in energy prices and the backward adjustments will be major as well.

CPI inflation in Moldova hits 33.6% y/y in July
12 hours ago
How do high gas prices push up the cost of power?
21 hours ago
Russian inflation falls to 15.1% in July
21 hours ago
Russia’s current account surplus hits new all-time high of $166bn
1 day ago
Poll shows every other Russian supports continuing the war against Ukraine
1 day ago