EBRD 2022: Russia and the war in Ukraine dominate the EBRD’s annual meeting 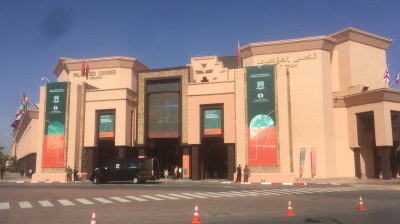 The agenda of the EBRD's first in-person annual meeting held in Marrakech was dominated by the war in Ukraine and the economic spillover effects for the rest of the region. / Ben Aris
By Ben Aris in Marrakesh May 10, 2022

The three-month-old war in Ukraine dominated the agenda on the first day of the European Bank for Reconstruction and Development (EBRD) annual meeting in Marrakech, Morocco, on May 10 – the first in-persona meeting in three years – as the impact of the conflict spills out across the region.

Delegates from the bank’s 73 member countries travelled to the North African country for the meeting held under the theme of “Responding to Challenges in a Turbulent World”. The EBRD released a new economic outlook for the region on the same day, which predicts a 30% contraction in Ukraine’s economy, a 10% fall for Russia and a general slowdown across the bank’s Emerging Europe region of coverage to only 1.1% growth this year.

The EBRD was the biggest single foreign investor in Russia until its shareholders put a hold on all new projects as part of the sanctions regime that descended following Russia’s annexation of the Crimea in 2014. It then switched its attention to Ukraine, which almost replaced Russia and was the second biggest  country of operation lat year after Turkey, but those investments are now disrupted as the country is being wrecked by Russian missiles and the invading troops. The bank is expected to report a rare loss for 2022 as a result of the conflagration.

That is a sharp reversal from the previous year, when the EBRD’s Ukraine business was booming, as the government of Ukrainian President Volodymyr Zelenskiy slowly implemented long-overdue reforms, with agriculture and the consumer-orientated sectors doing especially well. As bne IntelliNews reported, the wage gap between Russia and Ukraine was rapidly closing, as Russia by contrast was stagnating, although Ukraine remained one of the poorest countries in the Emerging Europe region.

“The EBRD has recorded its highest-ever profit of €2.5bn in 2021,” the bank said in a press release on April 7, “which beats the previous record, set in 2006. The bank’s record results for last year were largely due to the excellent performance of equity investments across its regions of operations.”

However, the bank stressed that “the war on Ukraine is likely to have a significant impact on 2022’s financial performance, as the EBRD has a large portfolio of investments and equity holdings in Ukraine, as well as portfolios in Belarus and Russia,” the bank said.

The bank’s operations in Eastern Europe have been disrupted while it waits  for the war to end, and the EBRD is preparing for the eventual reconstruction effort that will start once the fighting stops. The EBRD recently announced it has already put together a €2bn economic resilience package to help Ukraine and neighbouring countries affected by the Russian invasion and more will come as the main effort at rebuilding starts.

“The bank quickly announced an initial €2bn economic resilience package for Ukraine and its neighbouring countries affected by the war, and we are determined to do all we can to help them deal with the consequences of the conflict,” Soha El-Turky, EBRD chief financial officer, said in a statement. “More widely, the EBRD has both the capital base and liquidity cushion to withstand the financial shock and continue to support Ukraine and the other economies where we work.”

The Kyiv Economic School has estimated that the cost of the damage to Ukraine, including lost earnings and the economic contraction, is of the order of $600bn, although former Ukrainian Finance Minister Natalia Jaresko put the cost even higher at possibly $1 trillion in recent comments. Estimates vary, and it remains impossible to put a definitive figure on the damage while the fighting continues, but separately the cost of the physical damage to housing and infrastructure is thought to be of the order of $100bn.

All of the EBRD’s investments in the region will be affected as the spillover effects of the Ukrainian war have sent inflation soaring and depressed investor appetite for assets in the region. In addition, many countries’ finances were already under pressure after heavy spending to get through the coronavirus (COVID-19) pandemic, according to Beata Javorcik, the EBRD’s chief economist.

“The rising inflation means central banks have been putting up interest rates and the rising cost of borrowing is only adding to the pressures as government finances come under pressure,” Javorcik told bne IntelliNews on the sidelines of the event. “Countries that have not spoken to the IMF or other multilateral lenders are starting conversations again now in preparation for problems later on.”

The EBRD invests primarily in the private sector, with the aim of supporting the transition to market economies. Its equity investments recorded a gain of around 30% (€1.7bn) – growing at roughly triple the rate compared with the 2021 benchmark of equity growth in EBRD economies. Substantial gains in the bank’s technology-related investments were a particular feature.

The region was booming up until October 2021, when the military tensions first appeared after Russia began to build up its forces on Ukraine’s border. Economic activity and investment were abruptly halted after Russian forces crossed the border on February 24, throwing the region into chaos.

The EBRD annual meeting is the first physical gathering since Sarajevo in 2019, as the COVID-19 pandemic forced the events in 2020 and 2021 to be fully virtual. Although many COVID-19 restrictions have been lifted in Morocco, precautions will still be in place for people entering the country and taking part in events.

The EBRD operates in 38 economies from Central Europe to Central Asia and the southern and eastern Mediterranean (including North Africa). The bank has been considering a further expansion of its geographic scope to sub-Saharan Africa and Iraq. Shareholders will consider whether to take the first step towards covering all of Africa in a discussion during the meeting on May 12.

The Kingdom of Morocco is one of Africa’s largest economies and a founding member and shareholder of the EBRD. The bank has invested more than €3.2bn in the country since it began operating there a decade ago.

CONFERENCE CALL: Invasion of Ukraine would threaten the delicate balance of interests in the Arctic

CONFERENCE CALL: A chance for Moldova and its biggest bank