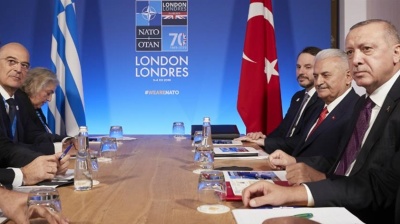 Turkey’s President Recep Tayyip Erdogan on December 4 backed off from his threat to veto a Nato plan to strengthen the defences of Poland and the Baltic states against Russia.

Prior to the December 3-4 Nato summit in London, Erdogan said he would block the initiative unless the military alliance backed Turkey’s description of the mainly-Kurdish People’s Protection Units (YPG) militia, which the Turks are attempting to clear out of a border zone in northeastern Syria, as a “terrorist” group. However, as the summit drew to a close Nato secretary general Jens Stoltenberg told a press conference that Turkey had dropped its opposition to the plan and that Nato leaders did not discuss the mainly-Kurdish YPG. In a communique, the leaders agreed to “a forward-looking reflection process”—this mechanism appeared to give Erdogan an ‘out’, allowing him to lift the threat to veto the scheme under preparation for Poland, Lithuania, Latvia and Estonia.

Stoltenberg, who will lead the reflection process, praised Turkey for endorsing the plan, saying: “We were able to take decisions and to move this alliance forward. All allies have agreed the commitment to article 5, which is one for all and all for one and that is an iron-clad commitment.”

Risking a charge of bluster

Erdogan, who is under political pressure at home as his administration fights to restore Turkey’s battered economy while ex-allies move forward with plans for two new political parties, has been particularly assertive of what he sees as Turkey’s rights in its backyard in the past year as he tries to rally his base. In not pushing his demands to the bitter end in this particular episode he risks being accused of bluster. It remains to be seen whether as part of some kind of summit bargain he expects Trump to shield him from US sanctions over his purchase of Russian S-400 missile defences viewed by Nato as a security threat.

According to Lithuanian President Gitanas Nauseda, in a meeting between Erdogan and the leaders of Poland and the Baltics, the Turkish strongman did not issue demands in return for his agreement to back the defence plans. “No one demanded anything from us for this. We all thanked President Erdogan for his solidarity,” Nauseda told journalists in London.

Labelling the YPG as a “terrorist” group would be a difficult proposition for Nato because the militia provided the essential ground forces in the US-led destruction of the so-called Islamic State Caliphate that arose in Syria, losing around 11,000 fighters in the process. Although US President Donald Trump ordered US forces to step aside as Turkey in early October invaded Syria to attack the Americans’ ally, there is still a certain amount of solidarity for the YPG in the Pentagon, US Congress, Nato and among EU states.

On December 3, French President Emmanuel Macron hit out at Erdogan, claiming Turkey sometimes works with Islamic State proxies in Syria. Macron said he supported Nato developing wider goals including combatting terrorism but added: “I am sorry we do not have the same definition of terrorism around the table. When I look at Turkey, they now are fighting against those who fight with us, who fought with us, shoulder to shoulder, against Isis [Islamic State]. And sometimes they work with Isis proxies.”

Another outcome of the summit saw Macron and Trump show agreement on the principle that European levels of defence spending need to rise and on how Russia has the potential to become a closer partner if its dispute with Ukraine can be resolved. However, many other European states, notably Poland, the Baltics, Germany and the UK do not share that portrayal of Russia.