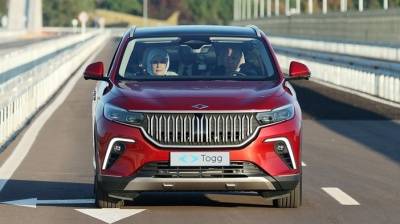 Erdogan takes his wife, First Lady Emine Erdogan, for a spin in the first Togg to come off the production line. / Turkish Presidency.
By bne IntelIiNews October 31, 2022

The Togg, billed as Turkey’s first domestically-produced electric vehicle (EV)—though dependent on foreign companies for key components such as its lithium ion battery and engine—was on October 29 unveiled by President Recep Tayyip Erdogan.

"Turkiye’s domestic car, Togg, will hit the roads of Europe in all of its models,” Erdogan said after driving the first of the electric vehicles (EVs) to roll off the production line. "They will say ‘crazy Turks’ are coming,” added Erdogan, hailing an anticipated Turkish economic success ahead of elections set to take place by June next year.

Last August, it was reported that Turkish-Chinese Siro, a 50:50 battery joint venture founded last year by Togg and Chinese battery cell manufacturer Farasis Energy, had started test production of lithium ion batteries in Gemlik, Turkey. Siro said the EV would launch with two battery alternatives. One would be for the 300-kilometre standard range. The other would be a larger battery for 500 kilometres.

Turkey’s Automobile Joint Venture Group, a consortium of local companies formed for the Togg project based in Bursa, northwestern Turkey, said domestic sales of the first Togg model, the C-segment SUV, are to begin at the end of the third quarter of 2023. The EV will be exported to Europe and then the rest of the world after 15-18 months of domestic sales only, it added.

Built production capacity would enable the output of 100,000 vehicles per year, Gurcan Karakas, CEO of the joint venture that makes the Togg, was cited as saying by Bloomberg. However, he added, the initial target would be the production of 17,000-18,000 C-SUV’s in 2023, with output to increase gradually thereafter. Turkey, meanwhile, will need to step up efforts to expand its currently extremely limited network of EV charging stations.

The price of the Togg, talked of by officials as the “people’s car”, is likely to be set in February, when preliminary sales begin. However, DW reported that there are plans to sell the SUV at Turkish lira (TRY) 900,000 (roughly €50,000), unaffordable for most people in Turkey. It quoted Emre Ozpeynirci, a journalist and automotive expert, who has been closely following the Togg investment, as saying ordinary consumers in the country could invest no more than 500,000 lira for a new car. However, after one or two years, more affordable Togg models should be available.

Looking at how the car is being used to boost Erdogan’s electoral prospects, Ozpeynirci said: "It is a big problem, this car polarises [opinions]."

To assist the Togg project, the Erdogan administration has granted Automobile Joint Venture Group tax cuts, free land, low borrowing costs and a state purchase guarantee of 30,000 vehicles a year until the end of 2035.

As things stand, 51% of materials used to build the Togg are Turkish-made. Industry minister Mustafa Varank has said he intends to see this increased to 65% in coming years.

Moscow is suspected of using multiple tools for hybrid attacks on democracy in Bulgaria, including spreading disinformation and financing political parties.

EWDN: A year in review – How Ukrainian tech resisted the war in 2022

Speculation that refusal to cut Russia ties led to Aleksandar Vucic being shunned by fellow Balkan leaders after pictures show him sitting alone at the back of a session at the World Economic Forum.