Estonian industrial production returns to growth in May 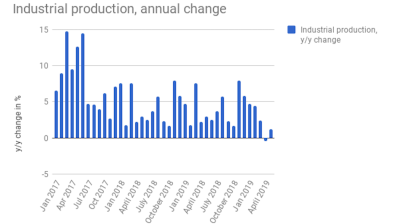 Estonian industrial production grew 1.2% y/y in May, working-day adjusted data from Statistics Estonia showed on July 2. The expansion follows a fall of 0.4% y/y recorded in Estonian industry the preceding month.

The reading marks a return to expansion in Estonia’s industrial output after April’s dent ended a 33-month series of uninterrupted growth, helping the economy. Estonian GDP growth beat expectations in January-March, expanding 4.5% y/y in unadjusted terms (4.6% y/y upon adjustment) on the back of surging investment.

GDP growth is expected to come in at below 3% in 2019 although the first quarter data appear to make that prediction overly pessimistic. The Baltic state’s GDP growth came in at a solid 3.9% in 2018.

The largest fall beset production of chemical products, where output fell 16% on the year.

Some 68% of industrial output was sold on the external market, Statistics Estonia also reported. According to unadjusted data, export sales of manufacturing production grew 9% in y/y terms in May while domestic sales remained flat y/y.

Wages in Romania grow in Q2
3 hours ago
Russia's GDP fell by 8.5% in 2Q20 due the lockdown quarantine measures
12 hours ago
Ukraine’s consumer inflation stayed at a 2.4% y/y level in July
19 hours ago
Romania’s exports continue recovering in June
1 day ago
ING analysts warn of L-shaped recession in Bulgaria
1 day ago