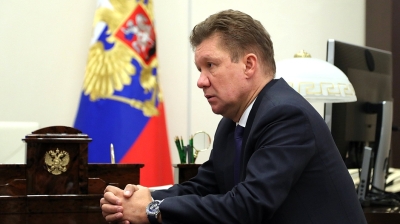 Alexey Navalny’s Anti-Corruption Foundation (known as FBK in Russian) has teamed up with investigative outlet Proekt to compile another report claiming to uncover systematic corruption at the highest level of the Russian state.

The report focuses on Alexey Miller, the CEO of gas giant Gazprom, the world’s largest public energy supplier. It accuses Miller of “embezzling billions” from Gazprom to enrich himself as well as the “friends and relatives of Putin”.

“Gazprom is not about business and efficiency. Gazprom doesn’t aim to be profitable and to earn money, and it never has. Gazprom exists in order to dish out money and to enrich Putin’s friends and contractors,” the report says.

“For more than 15 years, a group of Russian intelligence officers has been carrying out secret business tasks: from the division of Yukos property to the acquisition of shares in the most promising assets of Gazprom. A significant part of the luxurious property received by this group of “golden colonels” is in the use of the head of Gazprom, Alexey Miller,” it claims.

The report mentions some big names, including oligarchs Arakdy Rotenberg and Gennady Timchenko, who it accuses of buying assets from Gazprom at knock-down prices and selling them back for huge profits.

“Roman Abramovich pulled off what was probably the most flagrantly corrupt deal in the entire history of the company. In 1995 he bought Sibneft in the “loans for shares” scheme for $100mn, then in 2005 he sold it back to Gazprom for $13bn. This deal alone allowed him to become one of the richest men in the world and buy football clubs, castles and yachts,” the report says.

As well as accusing members of Putin’s inner circle of carving up public assets and abusing state contracts for their own enrichment, the article claims that these individuals have tied their money up in a network of offshores and properties. Most strikingly, Miller is accused of owning a palace known as “Millerhoff” outside Moscow.

Another, even bigger palace outside Moscow is also linked to Miller by the report. It has an enormous glass dome, servants’ quarters, a guest house and a floor plan of over 8,500 square metres. Flight data from planes and helicopters linked to Miller are used to reinforce the allegations, as well as public ownership records.

Miller has not yet publicly responded to the allegations. He appeared at the St Petersburg International Economic Forum (SPIEF) on June 16, where he blamed rising gas prices on EU countries.