2023 got off to a good start, but it will be a difficult year for gas supplies and another energy crisis could be around the corner. / bne IntelliNews
By Ben Aris in Berlin January 18, 2023

Last year was a disaster for Europe as Putin’s energy war wreaked chaos on Europe’s economies by sending up gas prices 20-fold, fuelling run-away inflation and causing a cost-of-living crisis that drove millions into poverty. Europe needs to act now to avoid a repeat, and possibly worse, crisis this winter coming.

Currently with gas prices below pre-war levels and storage tanks at over 83% full, the outlook is less scary. Russian President Vladimir Putin lost the winter battle in the energy war but Europe is enjoying only a temporary respite, warned the International Energy Agency (IEA) in a recent report.

Following its invasion of Ukraine, Russia cut pipeline deliveries of natural gas to the European Union by more than half. Russia’s pipeline supplies declined from 155bn cubic metres in 2021 to around 60 bcm in 2022, but the agency warns that Russia could send as little as 25 bcm this year.

“Our assumption in this report is that Russian pipeline deliveries to the European Union will fall to zero from the beginning of January 2023. If they were to remain at their current levels, then Russia would supply around 25 bcm over the course of 2023,” the IEA said. This is less than half the 60 bcm that is likely to be delivered in the whole of 2022, which in turn is less than half the amount supplied in 2021. 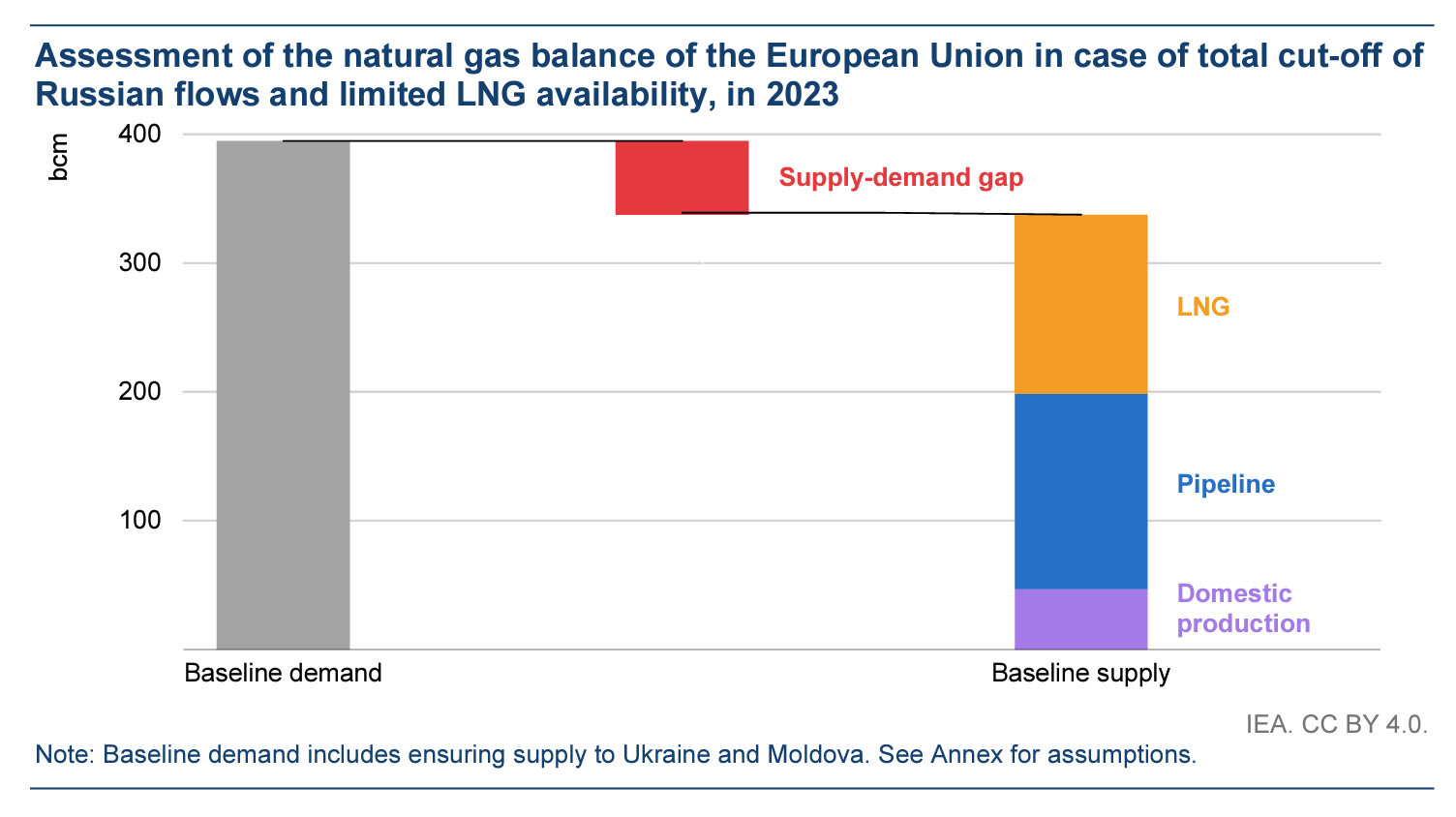 That shortfall has to be made up somehow. Even halving deliveries to 60 bcm drove up natural gas prices on European hubs to record levels. Month-ahead prices on the Dutch TTF – Europe’s leading gas hub – averaged over €130 per megawatt-hour ($40 per million British thermal units) in the first 11 months of 2022, more than seven times as high as the average between 2016 and 2020, according to the IEA.

The sky-high prices caused a huge amount of damage to Europe’s heavy industry that it is yet to recover from. Some factories were forced to close down and it is unsure if they will ever open again. The EU managed to cut gas demand by 10% (or about 50 bcm) on average in 2022 but about a fifth those gains (10 bcm) were because Europe’s energy-intensive industry began to close down, made economically unviable by the record prices. This year industrial gas demand is set to be around 20% (or 25 bcm) lower in 2022 than in 2021 because of this effect.

“The fertiliser industry accounts for more than half of these production curtailments. According to the International Fertiliser Association, around 70% of the EU’s ammonia production capacity was offline in August 2022 and around 40% had still not restarted in October 2022,” the IEA said in its report. “There have also been production curtailments in the steel and aluminium sectors, where high gas and electricity prices led to a 10% drop in production in the ten first months of 2022 compared with the same period in 2021. There was also less natural gas consumed in cement, glass, ceramics, food and machinery production, although most of this was because of efficiency improvements and fuel switching.”

Burgeoning LNG supplies saved the day in 2022/23 by more than making up for the falling Russian supplies, but that gift is unlikely to repeat in 2023/24.

Last year Europe became the world’s biggest importer of LNG, bringing in a record 136 bcm, mostly from the US and Qatar, that more than covered the Russian shortfall, made possible by China’s economic slowdown that destroyed demand there. Asian LNG imports fell by 7% in 2022, after China’s imports dropped around 20%, or 20 bcm, freeing more LNG for export to Europe.

This year as China phases out its no-COVID restrictions its economy is expected to bounce back and the global LNG market is anticipated to be a lot tighter as a result.

“If China’s LNG imports recover to their 2021 levels, it would capture most of the overall increase in global LNG supply in 2023 and limit the LNG volumes available to the European market. Under this assumption, we estimate that the European Union could increase its LNG imports by around 7 bcm in 2023,” the IEA says, well short of the circa 30 bcm additional gas imports it needs.

Global LNG supply should increase by 23 bcm this year, says the IEA, coming from new liquefaction projects in Africa and the United States. But China’s recovery will see its LNG imports return to their 2021 levels that will eat up all of the new LNG production due this year.

“We assume that natural gas output in the European Union will decline by around 5% in 2023. Groningen gas production has been capped at 2.8 bcm for the Gas Year 2022/23 (down from 4.5 bcm during the previous gas year) and extraction at the field is due to cease completely by 2024 at the latest,” says the IEA.

Other European fields in Romania can only add an extra 0.5 bcm and those in Denmark are offline until late 2023, but even then can only add 2.8 bcm. To add to Europe’s headaches is that if Russia cuts off Europe from gas completely it is will be on the hook to supply Ukraine and Moldova with gas, which are both ultimately dependent on Russia, thus pushing up the EU need for gas further.

And of course the winter could still get a lot colder again or the summer could be another hot one, both of which will increase the demand for gas.

There are a lot of moving parts, making predicting what will happen very hard. But with the demand for gas in 2023 likely to increase over last year’s demand, the IEA’s starting point for considering gas demand in the European Union in 2023 is consumption in 2022 of 360 bcm – down by around 100 bcm from pre-war levels.

“This provides the baseline level of demand for the estimate of the supply-demand gap in 2023. We assume that Europe’s gas storages will be around one-third full at the beginning of April 2023, which translates into storage injection needs of 65 bcm over the summer in 2023 to reach a storage level of 95% at the start of the 2023/24 heating season,” the IEA said.

All told the IEA estimates that there will be a total shortfall of 57 bcm this year. Happily, the various energy saving plans, fuel switching initiatives and demand destruction already in place will cover 30 bcm of this shortfall. But that still leaves Europe 27 bcm short, unless a five-point IEA action plan is put in place that could save the day.

M&A in Emerging Europe fell by 20% to €32.93bn in 2022
VISEGRAD BLOG: When Eastern European states speak out they are now listened to
Rural parts of Bulgaria and Croatia suffer Europe’s deepest long-term population loss

M&A in Emerging Europe fell by 20% to €32.93bn in 2022
5 hours ago
Belarus Corruption Watch: How one of Lukashenko’s 'wallets' evades sanctions
21 hours ago
Poland basks in the glory of being Kyiv’s chief ally in Europe
3 days ago
Russia forges ahead with gas ambitions in Uzbekistan, Kazakhstan
4 days ago
Mongolian government accused of rushing through veiled law that dismantles freedom of speech
6 days ago