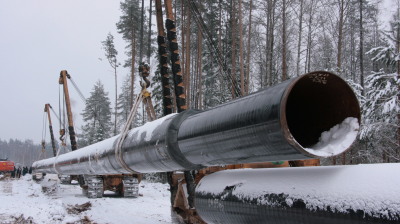 Gazprom made huge profits from soaring prices during the European gas crisis and intends to plough the profits back into new infrastructure mostly targeting future exports to China. / Gazprom
By Newsbase staff November 26, 2021

Capital spending levels at Russia’s Gazprom are once again creeping upwards, as the company prepares to ramp up gas supplies to China and expand development in the Russian Arctic The state-owned gas supplier has abandoned its promise of less than two years ago to be more fiscal prudent, spurred on by soaring gas prices that have led to a spike in its profits.

Under a programme announced on November 26, the company plans to invest RUB1.76 trillion ($23.3bn) in 2022, up from a target of RUB1.185 trillion for this year. Gazprom’s actual capital expenditure next year is expected to come to RUB1.4 trillion, but additional funds in the investment programme will go towards long-term financial investments and the purchase of long-term assets, its management has said. Borrowing from outside the company is expected to total RUB272.8bn in 2022.

These funds will partly be allocated towards additional upstream development in Eastern Siberia. Gazprom has been sending gas to China since December 2019 and is now investing in expanding supply at the Chayandinskoye field in the Yakutia region, which at full capacity is expected to flow 25bn cubic metres (bcm) per year of gas. In the mid-2020s it also intends to commission the Kovyktinskoye field in the neighbouring Irkutsk region, which will have a similar peak capacity.

Gazprom also has to fund further development of the Power of Siberia pipeline that delivers this gas to China. And investment will also be allocated to the Amur gas processing plant that handles these supplies.

Moving up north, Gazprom said some of the funds would go towards additional development at fields on the Yamal Peninsula. Yamal is tipped to become Russia’s biggest hub for gas production. This will come on the back of field development by Novatek, which is ramping up LNG exports to Asia and Europe, and Gazprom, which has set sights on expanding pipeline supplies to Europe and sending additional volumes to China via a planned second pipeline through Mongolia.

The only Gazprom field on Yamal currently in production is Bovanenkovo, but this project alone has a capacity of 115 bcm per year, most of which is shipped to Europe. Gazprom kicked off development drilling at a second, neighbouring field called Kharasaveyskoye in June last year, and this will contribute a further 32 bcm per year of supply under its first, 230-well phase.

Kharasaveyskoye is due on stream in 2023, according to the official schedule, although recently Gazprom has spoken of fast-tracking some of its upcoming upstream projects in light of the supply crunch in Europe.

Another of Gazprom’s largest fields on Yamal is Tambey, which the company has teamed up with private partner Rusgasdobycha to develop. The pair formed a joint venture for the project in November, and the next step will be the transfer of licences to the partnership, which should take place next year.

Gazprom acquired rights to Tambey in 2008 but has held off on its development while it has focused on ramping up output at Bovanenkovo. It had been expected that Gazprom would continue putting off development, but it suddenly announced in May that it would push ahead, targeting first gas in 2026. Even this schedule might be brought forward in light of market conditions, but that decision will depend on how long the supply crunch and high prices in Europe are sustained.

Gazprom also noted that its investment programme would set aside some funds for infrastructure improvements to carry Tambey’s gas to the processing and liquefaction hub it is developing with Rusgazdobycha on the shore of the Baltic Sea. The field’s gas has a high concentration of ethane, which is due to be separated at the Baltic complex and used as feedstock for petrochemicals.

It is likely that Gazprom will revise its 2022 investment programme upwards over the course of next year, as is often the case with its spending plans. Gazprom purposefully uses a conservative gas price to base its investment plans on each year, ensuring no overspend that might erode profit dispersals to the Russian government and its other shareholders. In September the company raised its target for 2021 to RUB1.185 trillion from 902bn that was originally approved in December last year.

Gazprom has drawn criticism in the past for investing too much on ambitious projects, sometimes with questionable economic rationale. And analysts have blamed this for the company’s comparatively poor share performance over the years.

The company’s spending levels soared in the late 2010s as it invested in the costly construction of Power of Siberia and its latest pipelines connecting with Europe, TurkStream and Nord Stream 2. The latter two projects do not expand Gazprom’s export capacity to the continent, but are instead designed to reduce flows via Ukraine. While this means they will not necessarily support increased Russian supplies to the market, Gazprom has said it expects to save billions in transit revenues as a result.

In early 2020, however, Gazprom promised investors that it would adopt greater fiscal conservativeness and focus more on rewarding its shareholders. It has also brought about other reforms to its business, including the introduction of extra incentives for its management to keep costs low and taking over control of some of its key contractors.

The planned hike in spending next year suggests that Gazprom may be diverting back to its high-spend strategy, however, encouraged by high gas prices. Back in 2020 the company was projecting that gas prices would remain in Europe for the foreseeable future, and therefore said it would aim to cap annual investments at around RUB1.2 trillion until 2030. But gas prices have seen an unprecedented surge this year, as global demand has rebounded in line with economic recovery but supply has not risen to meet it.

Gazprom’s Baltic gas complex will continue to be a drain on the company’s capital resources over the next few years, although the project will help it fulfil its long-held goal of expanding LNG exports. The bigger question is whether Gazprom’s far more ambitious plan to develop a second gas pipeline to China through Mongolia will be realised.

Russian President Vladimir Putin announced in mid-October that Moscow and Beijing had agreed “in principle” on a route for the pipeline. The necessary upstream and pipeline development for the project is anticipated to cost tens of billions of dollars.

It is understood that China and Russia are still nowhere near reaching a gas sales agreement to underpin the Mongolian pipeline’s construction. It notably took the two sides over a decade to agree such a contract to support Power of Siberia, with pricing proving to be a major sticking point.

Pipeline deals are never an easy undertaking, and are in part economical and political in nature. An agreement on a second pipeline to pump Russian gas to China will therefore depend on how political ties between the two, sometimes uneasy partners evolve, and not only on the gas market situation. This said, the current gas crisis has brought energy security to the top of the agenda in many countries including China, which is suffering from rolling blackouts right now as a result of the energy crunch. If both sides believe the market will remain tight for years to come, it would prompt them to try and make faster progress in talks.

bneGREEN: Fit for 55 – not fit for purpose
Report says Russian gas supplies to Europe via TurkStream now endangered
Meloni won the elections, but her programme won’t make Italy the next Hungary

Belarus’ turn to China
2 days ago
East and West clash in Bulgaria’s snap general election
2 days ago
Old faces set to keep ruling Bosnia post-election
2 days ago
Georgia’s border clogged with thousands of Russians fleeing the Kremlin’s mobilisation
3 days ago
Meloni won the elections, but her programme won’t make Italy the next Hungary
3 days ago