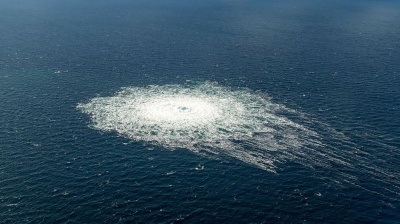 German security services said that the three tubes of the pipeline will be unable to be used again unless they are repaired quickly, as a lot of salt water will run in and corrode the pipelines. / bne IntelliNews
By bne IntelliNews September 29, 2022

German authorities have said that the damage to three of the four Nord Stream pipelines is beyond repair and those sections can never be used again, The Tagesspiegel reported on September 28.

German security services said that the three tubes of the pipeline will be unable to be used again unless they are repaired quickly, as a lot of salt water will run in and corrode the pipelines, The Tagesspiegel learned from government circles.

According to the Danish Energy Agency, more than half of the gas has already escaped from the affected lines. The lines will probably be empty by October 2, the head of the agency, Kristoffer Böttzauw, said at a press conference on September 28.

The twin Nord Stream 1 & 2 pipelines, which are made up of two pipes each, were hit by an explosion at the weekend and sprang leaks that saw pressure in both sets of pipelines fall to nothing.

After Sweden’s seismological services confirmed there was an explosion in the vicinity of the pipes during the evening of September 25, speculation has been rife over who was responsible for the attack on a major piece of European energy infrastructure.

The explosions happened just outside Danish territorial waters at a depth of 80-90m, according to German reports, making an attack a technically difficult operation and suggesting either submarines or advanced underwater technology must have been involved.

There is little doubt that this was an attack and not an accident, as there is a significant distance between the three holes in the three pipelines where the leaks originated and these all appeared within a few hours of each other.

So far, pundits have suggested that Russia, the US, Ukrainian special forces and Poland could have been responsible.

German Economics Minister Robert Habeck (Green Party) warned of the danger of further acts of sabotage. "Of course, the critical infrastructure is a potential target," said the Vice Chancellor. "But Germany is a country that knows how to defend itself and Europe is a continent that can protect its energy infrastructure."

Norway, currently one of the most important suppliers of non-Russian gas to Europe, has massively strengthened the protection of its pipeline system.

The European Union also considers sabotage to be the likely cause of the leaks in the Nord Stream 1 and 2 gas pipelines and has threatened to take countermeasures.

"All available information indicates that these leaks are the result of a deliberate act," said EU foreign policy chief Josep Borrell the same day, reported Tagesspiegel. Any intentional disruption to Europe's energy infrastructure will "be met with a robust and collective response."

As expected, Ukraine was even more explicit: "The large-scale 'gas leak' at Nord Stream 1 is nothing more than a terrorist attack planned by Russia and an act of aggression towards the EU," wrote Ukrainian presidential adviser Mykhailo Podoliak on Twitter.

Moscow has blamed the US, pointing to explicit threats by US President Joe Biden and others ahead of the war that the US would shut down the pipeline if Russia invaded Ukraine, irrespective of its European partners' wishes. Russia has called a UN emergency meeting where it will present its evidence.

According to a Russian media report, a US helicopter that was loitering over that section of the pipeline could be involved in the leaks in the Nord Stream 1 and 2 gas pipelines.

However, others point out that the helicopters are also routinely used in anti-submarine operations.

The leak of so much methane into the atmosphere will exact a heavy toll on the environment, as methane is fifty times more damaging than CO2, say experts. The Danes calculated that the climate impact of the gas leak corresponds to about a third of Denmark's total climate impact in one year, but poses no health or other risk to the population.

No gas was flowing through either of the pipelines. Nord Stream 2 was never certified and never went into operation; Nord Stream 1 has not been working for a month after Russian state-owned gas giant Gazprom shut it down for repairs.

However, the removal of Nord Stream from the picture entirely has spooked markets, as it destroys the possibility of resuming deliveries of gas in the depth of winter if an energy crisis becomes acute and raises fresh questions about energy security in Germany and Europe. Gas prices jumped 20% a day after the attack on the pipeline was announced.

In theory some gas deliveries could be restarted via the undamaged Nord Stream 2 string, but that would need the pipeline to be certified, which experts see to be politically impossible in the current climate.