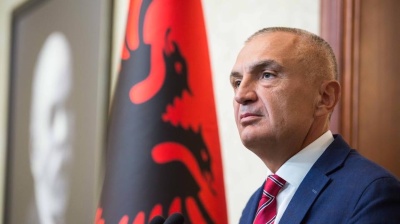 Albanian President Ilir Meta has invited all Albanian citizens to gather for protests in early March for the return of state institutions to the people and the proper functioning of institutions, local media reported on February 19.

Meta, who came from now opposition Socialist Movement for Integration (LSI), has repeatedly clashed with the government led by Prime Minister Edi Rama.

The parliament, where Rama’s Socialists have a majority, launched impeachment proceedings against Meta last year after the president attempted to postpone the June 2019 local elections.

At a press conference on February 19, Meta claimed that the state institutions, the parliament and the judicial bodies do not function properly and are working against the constitution.

“We will wait for you all on March 2 to protect institutions,” Meta was cited as saying by Albanian Daily News. According to Meta, the presidency is now the only institutions that protects the constitution. The protest will be held on the Martyrs of the Nation Boulevard.

Meta’s LSI was in coalition with Rama’s Socialists between 2013 and 2017 but after the Socialists won a resounding victory in the 2017 general election the party dispensed with its former coalition partner.

Since then, the LSI has been in opposition and together with the country’s largest opposition party, the Democratic Party, launched a boycott of the parliament last year.

Meta responded by saying he was postponing the June municipal elections — seen as a key test of democracy and the capacity of the political elite in Albania to solve problems in a peaceful manner — saying security could not be guaranteed.

His decision was challenged by Rama’s government, and Electoral College overruled Meta’s decree. The vote went ahead on June 30 but was boycotted by the opposition leading to the installation of Socialist mayors in most municipalities.

Meta’s call for protests comes as Albania is awaiting a decision from EU members on the start of its EU accession negotiation process. The decision was delayed last October, but both Albania and neighbouring North Macedonia are hopeful of getting a positive decision this spring.