How interconnected are the economies of Russia, Ukraine, Belarus and Kazakhstan? Inflation and rates outlook for 2020 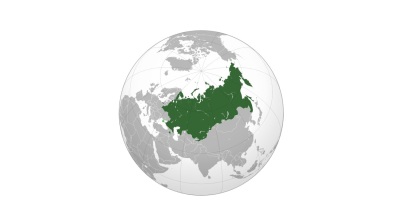 The economies of Russia, Ukraine, Belarus and Kazakhstan (KRUB) remain joined at the hip, but all are expecting inflation and prime interest rates to fall in 2020
By Ben Aris in Berlin January 12, 2020

In 1991 the Soviet Union broke apart and created 15 independent countries. But over the last three decades, while these countries are politically independent, the economies of Russia, Ukraine, Belarus and Kazakhstan (KRUB) remain joined at the hip. The trade, labour and financial markets are still tightly tied, so a crisis or sanctions imposed on Russia directly affects the other economies. VTB Capital (VTBC) has tried to assess just how tightly tied the economies remain today in a report.

“Russia is a significant trading partner and/or important labour market for the other three countries. Our estimates suggest that economic changes in Russia produce visible spillovers. Based on the historical breakdown of our Bayesian Panel VAR model, we calculate that the shocks related to Russian macroeconomic variables account for, on average, 37% the of FX, inflation and interest rate volatility for Belarus, and around 30% for Ukraine and Kazakhstan,” Alexander Isakov, chief economist at VTB Capital, said in a note.

The most direct channel for shocks to be transmitted is the currency. As all the countries of the Former Soviet Union (FSU) continue to trade heavily with each other they all keep significant amounts of rubles in their reserves and changes in ruble prices directly cause changes in the balance of payments of all five countries. According to VTBC estimates, a +10% one-off shock in $-RUB exchange rate values leads to $-BYN, $-UAH and $-KZT changing 3.9%, 2.5%, 4.1% respectively, on a 12-month horizon, according to VBTC calculations.

Due to the break in relations between Ukraine and Russia after the annexation of the Crimea in 2014 when the two countries effectively closed their borders, Ukraine is now the least affected by shocks that hit Russia, says Isakov. According to UN Comtrade data, trade turnover between Russia and Ukraine has declined 30-­45% over the last five years, with the lower figure reported by Russian customs and the other by Ukrainian customs.

Two other aspects keep the vulnerability high: the important role public employment plays in all the countries and their sensitivity to food prices.

Public employment remains important in all four countries, according to the various statistical services. While the share of public sector employment in Belarus is gradually declining, it was still roughly 40% of total employment in 2018, and exceeds 30% in Kazakhstan.

“This means that discretionary decisions on wage policy in the public sector might create unexpected shocks on the demand side, affecting inflation and interest rates,” says Isakov.

Food prices are also important and have a large non-monetary impact on headline inflation trends in all the KRUB countries. Food accounts for 54% of Ukraine's CPI, for Belarus it is 45%, and in Kazakhstan and Russia 39% and 38% respectively, according to VTBC.

Managing the effects of things like hiking public wages is difficult. Kazakhstan successfully reduced the inflationary impact of a public sector wage hike in 2019 but at the same time cut regulated utilities costs as a counter-balance, but policies like this are quick fixes and don't address the fundamental problems, says Isakov.

The goal of all the governments in the KRUB countries is to reduce their exposure to these interconnecting shocks, but the Kremlin’s drive to develop the Eurasia Economic Union (EEU) will work in the opposite direction, as it attempts to build a single market modelled on the European Union (EU) that hosts the free movement of goods, labour and funds. Against that, a larger EEU market will become more dependent on internal demand and that will make it more robust, so external shocks will have less of an impact eventually.

Of all the macro indicators, it is inflation that is the most important for the governments in the region. Russia had a good year in its fight against inflation, which fell faster and further than anyone anticipated in 2019.

Russian inflation fell to a post Soviet low of 2.3% in June 2018 and was on the level of a “normal” country after three decades of elevated price rises. But in the second half of 2018 it started to rise again, partly due to political fears of fresh harsh US sanctions, and finished the year at 5%. The Russian government also gave inflation a boost by increasing VAT by 2pp to 20%, but the effects of this wore off much faster than anticipated and by the end of 2019 inflation had fallen back to 3.5% -- below the Central Bank of Russia (CBR) target rate of 4%. The inflation outlook for 2020 remains modest and below the 4% target.

“In Russia, we expect inflation to drop in 1Q20, but then bounce back in 2H20. We expect full-year inflation to print 3.7% year on year in 2020 on a visible pick up in food inflation, steady services inflation and somewhat weaker non­food inflation, depressed by the strong exchange rate pass­through,” says Isakov.

Ukraine also had a stellar year in fighting inflation, which had been pushed up to crisis levels during its economic meltdown starting in 2015. The National Bank of Ukraine (NBU) has shown its independence and kept interest rates high, even hiking them further in 2018 to curb inflation, which began to tumble in 2019. But the NBU has been slashing rates in recent months, cutting the prime rate by two full percentage points in December and 150bp in November to end the year with a monetary policy rate of 13.5% after inflation fell to 5.1% in November after starting the year at over 9%.

Despite the cuts Ukraine still has one of the highest real interest rates in the world, which was causing problems at the end of the year; the high interest rates have been sucking money into the domestic bond market, where foreign investment has risen to over $4bn. That has sent the value of the hryvnia up by 17% in 2019, making it one of the best performing currencies in the world, but that in turn is hurting exports. The NBU started intervening in the FX market to contain the appreciation of the domestic currency, which broke through the UAH24 to the dollar mark in December – a level it hasn't seen for years.

In Kazakhstan, VTBC forecast inflation roughly flat to current prints and expects the headline inflation to remain at 5.4% y/y in 2020.

VTBC also predicts inflation to remain steady in Belarus in 2020 and slow somewhat to 5% y/y by the end of 2020, with the most visible slowdown in services inflation, from 8.0% to 7.2%, according to VTBC calculations.

“We generally see inflation lower across the region, with the exception of Russia, where we expect a pick-up to 4% by YE20. We forecast the largest decline in inflation to be in Ukraine, while expecting Kazakhstan and Belarus inflation prints remaining roughly unchanged,” Isakov said in a report. 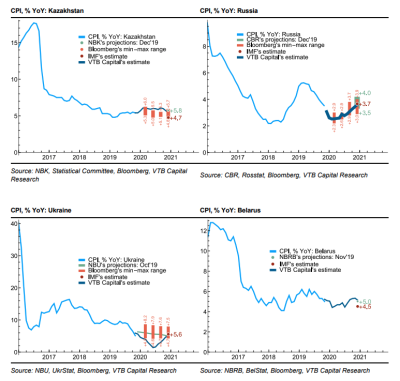 Currencies in the KRUB countries are also expected to continue to strengthen somewhat as the battle against inflation progresses. “We expect $-KZT to remain roughly level and finish 2020 at 387, $-RUB to soften to closer to 63 by YE20, $-UAH to move to 25.3 and $-BYN to soften to 2.1. Overall, we expect all currencies, except $-KZT, to remain stronger in 2020 than in early 2019, preserving the support they received from expectations of lower core rates,” Isakov said.

More rate cuts on the cards

Both Russia and Ukraine have started a monetary easing cycle that will continue in 2020 that will also boost growth. Both the CBR and NBU started aggressively cutting rates in the last quarter of 2019 and with inflation anticipated to keep falling, plus the extremely high real interest rates in both countries, there is plenty of room for more cuts.

“Ukraine is the only country in the group where the central bank provides a type of interest rate forward guidance, and our estimates broadly match the guidance for 1H20, but suggest space for steeper easing in 2H20,” says VTBC.

Belarus lowered its interest rates to 9% from 9.5% in November, saying inflationary pressures continue to fade in the third quarter of 2019. In September the annual inflation rate was down to 5.3% in line with the central bank’s predictions and the board of governors expect inflation to fall to 5% in 2020.

“In Belarus, policy rate outlook remains less certain, as the country is still transitioning to the inflation targeting regime, but our estimates suggest a potential for easing to 7.5-­8.0% by year end 2020,” VTBC said.

And in Kazakhstan, VTBC expects 0.75-­1.00pp of easing on the back of stabilisation of headline inflation growth. Such a scale of easing in 2020 would roughly put the policy rate in line with the National Bank of Kazakhstan’s (NBK) estimate of the 3.0-­3.5% range for the real neutral rate (with the usual caveat regarding the uncertainty attached to such estimates). 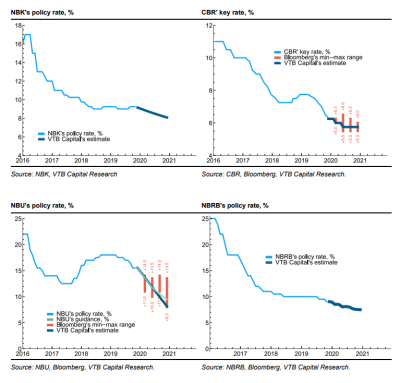