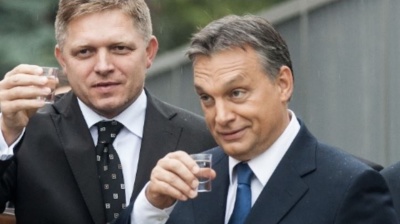 Former Slovak prime minister Robert Fico (left) is offered palinka by his host Hungarian PM Viktor Orban during his visit to Hungary in 2012.
By Tamas Szilagyi in Budapest August 6, 2020

Hungary's finance ministry is reviewing the possibility of introducing a tax exemption on palinka, the traditional fruit brandy, as early as 2021, a year before a recently issued European Union directive allows the preference, local media wrote on August 6.

Hungary has fought for years to make the traditional fruit brandy palinka exempt from taxes and government officials said they had succeeded, as EU directive 2020/1151 – of July 29 – allows member states to declare fruit distillate for household consumption tax-free up to 50 litres per year from January 1, 2022.

The EU directive also stipulates that member states must "lay down conditions for the purpose of preventing any evasion, avoidance or abuse" of the exemption.

One of the first measures of the first Orban government in 2010 was to cancel the licence for home distillation of palinka, which accounts for about a third of retail turnover in spirits. Parliament also scrapped excise tax up to 50 litres, if it was produced for private consumption.

In 2014, the European Court of Justice in 2014 ruled that Hungary had infringed EU law by exempting the private production of small quantities of spirits from excise duty.

A year later the government levied a HUF700 (€2) per litre excise tax on home-distilled palinka. The tax, however, did not stop the commercial sale of home fruit brandy. It is a common practice by pubs and bars to buy palinka from local producers evading taxes. The EU directive will not address that problem.