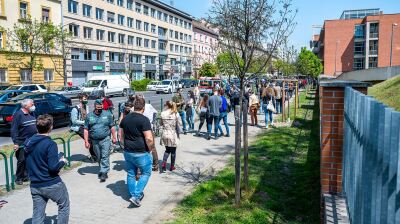 The death toll from COVID-19 has risen to 40,000 since the start of the pandemic, making Hungary the 4th worst globally in terms of death per 1mn inhabitants.
By bne IntelliNews January 12, 2022

The number of deaths in Hungary reached 150,000 last year, the highest since 1945, which means that the country’s population fell by nearly 60,000, the steepest decline in 145 years. The death toll from COVID-19 has risen to 40,000 since the start of the pandemic, making Hungary the 4th worst globally in terms of death per 1mn inhabitants from the pandemic.

Online news portal Telex compiled available data before the official figures are released by statistics office KSH. Even though 93,000 children were born last year, the highest in a decade, this could not offset the negative mortality rates. In 2020 the number of fatalities exceeded births by 47,000, so 2021's figures represent a 17% increase from the previous year.

The government has long advocated a "procreation over immigration" approach to deal with demographic decline and introduced a string of measures. Prime Minister Viktor Orban repeatedly said that family support programmes are his government's answers to migration.

Generous state grants and loans to families helped to lift the fertility rate from 1.2% in 2010 to around 1.5% in 2020, but fertility rates remain one of the lowest in Europe.

Mortality rates are also poor because of the bad health of Hungarians. The average life expectancy of men was 72.5 years in 2020, the fifth-lowest in the EU.

According to official data from the KSH, the excess death rate of COVID-19 was relatively low in Hungary in 2020. The statistics office put the figure at 8,300 as they took the average death rate of the previous several years as a baseline. In 2021 the figure is expected to reach around 25,000, according to Telex.

Hungary passed a sad threshold on Tuesday. According to figures from the government coronavirus task force, 40,000 people have now died of COVID-19. Hungary for long was the frontrunner in vaccination in the EU, as more than 50% of the population, or 5mn, had received two doses by the end of April 2021. Since then only 1mn people were inoculated. As of Tuesday, some 3.3mn received the booster shot. The vaccination drive has picked up somewhat in November at the height of the fourth wave as the government launched a campaign in which jabs can be taken without pre-registration.

According to data aggregator Worldometer, Hungary currently ranks  fourth worst in COVID-19 related deaths per million people since the beginning of the pandemic, and also has the fourth worst in terms of the seven-day rolling average of daily new fatalities based on John Hopkins Unversity’s data table.