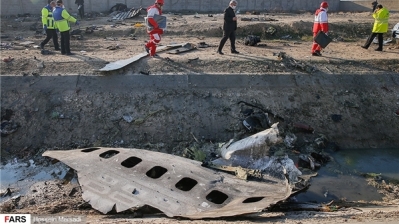 Investigators at a wreckage site following the crash of the Ukrainian commercial flight.
By bne IntelliNews January 8, 2020

Iran’s refusal to hand over two recovered black boxes to Boeing following the January 8 crash of a Ukraine International Airlines (UIA) aircraft near Tehran sparked the circulation of speculation on social media that there was something suspicious about the downing of the plane.

There were no survivors after flight PS752 to Kyiv , carrying 176 people, appeared to suffer a catastrophic incident, hours after the Iranian missile strikes on military bases in Iraq used by US forces—one theory doing the rounds was that Iran could have mistaken the three-year-old Boeing 737-800 for an incoming US military aircraft. However, absolutely no evidence for that has emerged.

The head of Iran's civil aviation organisation was quoted by Mehr news agency as saying that the black boxes would not be handed over either to Boeing or the Americans. Ali Abedzadeh added that Iran would lead the investigation but would allow Ukrainian investigators to be present.

Ukraine's foreign minister tweeted that he had spoken to his Iranian counterpart and they had agreed that the countries would coordinate their investigations. Ukrainian President Volodymyr Zelensky cut short a trip to Oman after news of the crash. He cautioned against "speculation or unchecked theories regarding the catastrophe" until official reports were ready.

In July 2014, Ukraine endured the Malaysia Airlines Flight 17 (MH17) tragedy in which an Amsterdam to Kuala Lumpur flight was shot down over the east of the country. Dutch investigators concluded it was downed with a Buk surface-to-air missile launched from pro-Russian separatist-controlled territory.

Further muddying the waters over the fate of the plane, which went down in good visibility, the Ukrainian embassy in Tehran deleted a tweet stating the plane’s crash was the result of an accident. It did not release another statement in its place.

UIA, a private airline, said there was no chance that human error was the cause, saying: “According to our records, the aircraft ascended as high as 2,400 metres. Given the crew’s experience, error probability is minimal. We do not even consider such a chance.”

Ukraine has not ruled out the possibility that the plane was struck by a missile. Kyiv dispatched experts and a search and rescue team to Iran, according to Kosmonaut.

On social media, multiple individuals claimed images of wreckage showed shrapnel damage, but Bellingcat open source investigators who reviewed the images responded that it was in fact debris and mud.

Aviation safety analyst Todd Curtis told the BBC: "The airplane was heavily fragmented which means either there was an intense impact on the ground or something happened in the sky,"

In an attached analysis of “What went wrong on flight PS752?” BBC transport correspondent Tom Burridge noted: “It reached nearly 8,000ft (2,400m) before the aircraft's data suddenly disappears. This is unusual and would suggest some type of catastrophic incident on board the plane. We have no evidence at this stage to tell us what caused the incident.”

Video circulating on social media allegedly showed the last few seconds of the plane's flight. It can be seen streaking across the night sky while on fire before it rapidly loses height. There is an initial explosion close to the ground. Then a final blast that lights up the area.

People spoken to on the phone by bne IntelliNews said they heard two explosions before the plane hit the ground, but did not discount the possibility of an echo effect.

“High degree of break up”

Tony Cable, a former senior inspector at the UK Air Accidents Investigation Branch (AAIB), told Sky News: "I've seen a few photos of the crash site. The wreckage shows a high degree of break up which indicates that the plane crashed vertically at speed into the ground. There seems to be a lot of relatively small pieces of debris."

On the idea that the plane was shot down, Cable said there would have to be “some pretty obvious characteristics if this was the case. There would be shrapnel damage to parts of the wreckage.

"Investigators would collect the wreckage on-site and then lay it out in the form of the aircraft."

On whether a bomb was placed inside the plane before take-off, he said: "A bomb could cause loss of control and a high vertical speed crash. Investigators would be looking for the wreckage that is separated from the main wreckage.

"So in a bombing, small pieces from the initial blast would be found somewhere else from the main structure."

The plane crashed moments after it left Imam Khomeini International Airport in Tehran at 06.10 local time.

COMMENT: Attacks on Ukraine’s reformers go unpunished at home, but the US justice system is going after Kolomoisky

COMMENT: Attacks on Ukraine’s reformers go unpunished at home, but the US justice system is going after Kolomoisky
Ukraine’s consumer inflation stayed at a 2.4% y/y level in July
Joe Biden condemns “Lukashenka” violence against Belarusian protesters using the Belarusian spelling of the president’s name