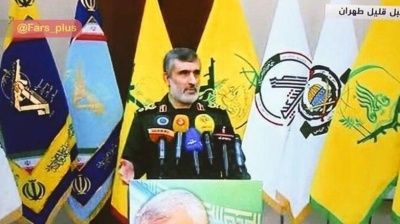 The aerospace commander of Iran’s Islamic Revolutionary Guard Corps (IRGC) has appeared at a press conference with the flags of numerous Middle East militia groups lined up behind him—the image makes for a meaningful show of regional power as it means the groups are under Iranian command at a juncture where Tehran has pledged to kick US armed forces out of the region, partly to avenge the Donald Trump-ordered drone strike assassination of Iran’s de facto military leader and second most important official, Major-General Qasem Soleimani.

Brig-Gen Amir Ali Hajizadeh was briefing official Iranian media on the January 7 strikes made by Iran with around 20 ballistic missiles fired on two bases in Iraq used by US troops. He said that the objective of the attack had not been to kill any US personnel, but that the operation could have been planned in such a way that as many as 500 Americans died in the first phase. Iran had been prepared to fire hundreds or even thousands of missiles if the US had responded to the attack militarily, he claimed.

"We had thought that the clash would continue for three days to one week. We had prepared a few thousand missiles for such circumstances," Hajizadeh was cited as saying by Fars news agency.

The flags arranged behind Hajizadeh included those of Iraq's Popular Mobilisation Forces—whose leader Abu Mahdi al-Muhandis was killed alongside Soleimani—as well as those of Lebanese Hezbollah and Palestinian Hamas. The flag of Yemen's Houthi movement, which until now Iran has always denied controlling in the Yemeni civil war, was also displayed. The groups are all members of the “Resistance axis” of pro-Iran militias that stretches from the Persian Gulf to the Mediterranean.

Hajizadeh also said that the only fitting revenge for the killing of Soleimani would be to drive US forces from the region. The objective was one Soleimani worked for over more than two decades as he used IRGC and proxy forces such as militias to shape and deliver Iranian foreign policy across Middle East conflict zones including Iraq and Syria.

Iran has presented the carefully calibrated attack on the Iraq bases as a “slap” to the face of the US, indicating that the entirety of the revenge for the killing of the general will be part of a long game that will be slow and painful for America. The missile strikes were just the start of “big operations” across the Middle East, Hajizadeh said.

After the assassination of Soleimani, US officials made it clear that they acted partly because he had the blood of hundreds of US troops—often killed with improvised explosive devices (IEDs) provided by Iran to militias in Iraq—on his hands, but the question of whether the killing was within international law has not gone away given that he was a government official of a sovereign nation assassinated on the territory of another sovereign nation, Iraq, and no pre-consultation with the latter had taken place.

US officials have also claimed that before his death an attack from Soleimani was imminent. No evidence for this has been forthcoming, but Trump on January 9 went even further by claiming that the general, who headed Iran’s elite, expeditionary Quds Force, was planning to bomb the US embassy in Baghdad. “We caught a total monster, and we took him out,” Trump said. “They were looking to blow up our embassy.” Again, no evidence was forthcoming.

The US House of Representatives is expected to vote on January 9 on a resolution to force Trump to halt further military action against Iran unless Congress gives the all-clear. "Members of Congress have serious, urgent concerns about the administration's decision to engage in hostilities against Iran and about its lack of strategy moving forward," Democrat Nancy Pelosi, Speaker of the House, said in a statement.

Even some of Trump’s fellow Republicans have been dismissive of a closed-door Congressional briefing given by senior Trump administration officials to explain the reasoning behind the killing of Soleimani. Republican senator Mike Lee called it the “probably the worst briefing I have seen, at least on a military issue, in the nine years I’ve served in the United States Senate”. Lee observed that the officials would not even answer a hypothetical question on whether the administration would need congressional authority to carry out the assassination of Iran’s supreme leader, Ayatollah Ali Khamenei.

Meanwhile, the US said on January 8 it was "ready to engage without preconditions in serious negotiations" with Iran following the countries' exchange of hostilities.

Iran’s ambassador to the United Nations dismissed the offer, saying it was “unbelievable” especially as Trump was calling for cooperation while imposing yet more sanctions on Tehran following Iran’s missile attack.

Majid Takht Ravanchi said Washington had “initiated a new series of escalation and animosity with Iran” by killing Soleimani.